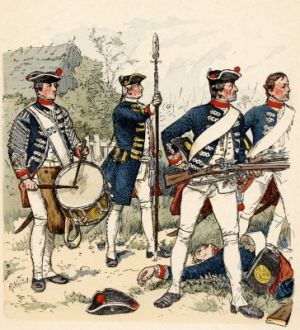 The unit was initially raised on August 18 1685 as a free company by Major-General Friedrich Ludwig von Holstein-Beck. In 1687, this free company was increased to a full strength battalion.

From 1698, the regiment was stationed in East Prussia.

From 1717, the garrison place of the regiment was Königsberg (present-day Kaliningrad in Russia). It recruited in a region extending from Eastern Sambria to Tilsit and Insterburg and in the towns of Darkhenen, Drengfurt and Königsberg.

The numbering system (Stammliste) was first used by Leopold I., Fürst von Anhalt-Dessau (Der alte Dessauer) in the Dessauer Spezifikation from 1737. Around 1780 the numbers were used in the printed Stammlisten, still with some variations for the fusilier regiments. It became official by "Cabinets-Ordre" from October 1, 1806. The present infantry regiment was attributed number 11.

Private of Below Infantry in 1756 as per the Uniformes Prussien et Saxonne, 1756/57 (Deutsches Historisches Museum, Berlin) - Copyright: Franco Saudelli and Dr Marco Pagan

In 1756, the regiment did not take part to any campaign.

In 1757, the regiment was part of Lehwaldt's Army assigned to the defence of East Prussia against a Russian invasion. On August 30, at the Battle of Gross-Jägersdorf, it was deployed in the first line of the infantry left wing in Below's Brigade.

In the winter of 1757-58, the regiment served against the Swedes in Pomerania.

On September 2 1759, the regiment, as part of Zieten's Corps, fought in the Combat of Sorau. During the retreat, the regiment escorted the baggage. On November 20, the regiment took part in the Battle of Maxen where it was attached to Rebentisch's Brigade. Around 3:00 p.m., Daun's Corps deployed with its right on the heights in front of Muhlbach and its left towards Hausdorf. Finck sent Jung-Platen Dragoons and Rebentisch Infantry to contain the attack. The latter soon joined the routing Prussian units. Completely surrounded, the entire Prussian force finally surrendered as prisoners of war.

In the winter of 1759-60, with its recruitment districts of East Prussia occupied by the Russian Army, the regiment could not be reconstituted to full strength and only a weak battalion could take the field for the incoming campaign.

From August to October 1762, the single battalion of the regiment took part in the siege and capture of Schweidnitz. 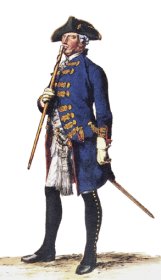 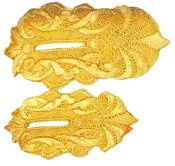 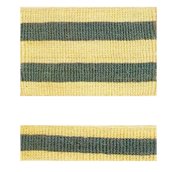 The uniforms of the drummers were similar to those of the privates but had much more elaborate lacing (drummer lace consisting of a white braid with two narrow blue lines) and other peculiarities:

The pikes used as staffs for the colours were medium brown with a golden finial.