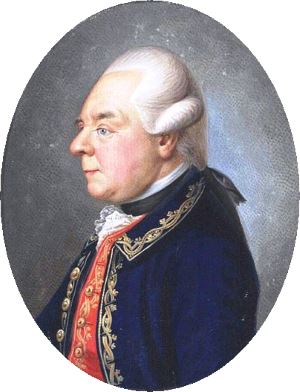 Ludwig Ernst was born on June 5 1711 in Ansbach in the Margraviate of Brandenburg-Ansbach (in present-day Germany). His family was an old German noble family, later subdivided into several branches. His father was Achatius von Benekendorff, Councillor and Oberamtmann at Feuchtwangen; his mother was born von Lengfeld. He was the eldest of 6 brothers.

Ludwig Ernst was educated at home until he was 16 years old.

From 1730 to 1732, Ludwig Ernst lived at the Castle of Rudolstadt, taking riding lessons.

In 1733, at the beginning of the War of the Polish Succession, Ludwig Ernst joined the Saxon Army in Dresden where he served as second lieutenant in the Garde du Corps. This regiment was stationed on the Polish border till the Summer of 1734. In the Autumn, he joined the army of Prince Eugène de Savoie as volunteer. Two of his brothers were already serving in this army which was posted between Heilbronn and Philippsburg.

In 1736, Ludwig Ernst's regiment was sent to Warsaw.

In 1738, the Garde du Corps was reduced from 12 to 8 coys and Benekendorff served as adjutant to Major-General von Polentz.

From 1739 to 1741, Benekendorff lived in the family estates and visited the courts of a few German principalities.

In 1741, at the outbreak of the War of the Austrian Succession, Benekendorff was assigned to the Maffai Cuirassiers as second captain. Maffai appreciated the young officers because of his knowledge of French, he very often used to talk with him in that language. In November, his regiment marched to Bohemia and participated in the occupation of Prague.

In 1742, Benekendorff's regiment campaigned in Moravia. The major of his regiment being ill, Benekendorff temporarily replaced him. A combined Prusso-Saxon Corps occupied Iglau (present-day Jihlava/CZ) and Major-General Grumbkow asked for Benekendorff to accompany him during this operation. Later on, Benekendorff returned to his regiment which took part in the unsuccessful Siege of Brünn (present-day Brno/CZ). In the second half of the year, Benekendorf served as adjutant to Major-General Dürrfeld and, later on, as Quartermaster of Lieutenant-General Count Renaud. After the signature of the Treaty of Berlin on July 28, Benekendorff was transferred to the Prinz Karl Chevauxlegers as second-captain.

In 1743, Benekendorff's regiment was stationed in Lithuania.

In 1744, when Frederick II marched through Saxony and invaded Bohemia, Benekendorff's regiment was deployed in a cordon in Lower Lusatia.

On December 15 1745, Benekendorff took part in the Battle of Kesselsdorf. After the defeat, he accompanied the Austrian army retiring to Bohemia.

In 1746, Prinz Karl Chevauxlegers were sent to Poland and Benekendorff was promoted to major.

In 1747, Benekendorff was promoted to lieutenant-colonel. His regiment remained in Poland until 1756.

From 1748 to 1750, Benekendorff was often sent to Wallachia and Bukovina to buy horses for his regiment.

In 1756, Major-General Nostitz concentrated the Karabiniergarde, three chevauxlegers regiments and two pulks of uhlans at Krakau (present-day Kraków/PL). During the Seven Years' War, Nostitz fought with this cavalry corps on the side of the Austria.

In 1757, Benekendorff assumed command of Prinz Karl Chevauxlegers when Lieutenant-Colonel Prittwitz fell ill. On June 18, Benekendorff and his regiment fought in the Battle of Kolin as part of General Nádasdy's Corps. They took part in the famous charge under General Serbelloni. After the battle, Benekendorff was promoted to colonel. His regiment also fought also in the Combat of Moys. At the end of the year, Benekendorff went to Vienna to receive the outstanding pay of his regiment. On his way back, Benekendorff got fever and spent seven weeks in Brünn.

In 1758, during the Prussian invasion of Moravia, Benekendorff's regiment was attached to de Ville's Corps. On June 30, it took part in the famous Combat of Domstadl, serving under Major-General Siskovics.

In 1760, Benekendorff and his regiment returned to Saxony and was attached to Lacy's Corps. They took part in the raid on Berlin.

In 1762, Benekendorff spent a few weeks at the spa in Karlsbad (present-day Karlovy Vary/CZ). He was soon afterwards promoted to major-general. He then took command of a small corps consisting of two regiments of Saxon chevauxlegers and some infantry of the Reichsarmee under the overall command of Prince Stolberg. At the end of the year, Benekendorff went once more to Vienna to collect overdue pay of his regiment.

In April 1763, after the signature of the Treaty of Hubertusburg, Benekendorff had an audience with Empress Maria Theresa before returning to Dresden. The Saxon cavalry then marched back to Poland. Benekendorff took some vacation and went to Eger (present-day Cheb/CZ) to take care of his health. In October, after the death of Friedrich August II, Prince-Elector of Saxony and King of Poland, Benekendorff was sent to Poland to oversee the cavalry regiments swearing fidelity to the Elector of Saxony, Frederick Christian. He assembled all regiments in Krakau and marched with the entire corps through Upper Silesia, Moravia, Bohemia to Upper Lusatia. At Gabel (present-day Jablonné v Podještědí/CZ), he met Lieutenant-General Renaud who assigned each regiment to various garrison places. Benekendorff with the Herzog von Kurland Chevauxlegers was sent to Görlitz where the regiment was reviewed.

On May 25 1765, Benekendorff was appointed chef' of the former Vitzthum Cuirassiers who counted only 384 men and 62 horses. The regiment garrisoned in the Harz region.

In 1767, the regiment received recruits and was re-established on a foot of 4 squadrons and 1 carabinier company.

In 1769, Benekendorff saw his income reduced from 5 to 2 thousand talers when his regiment was reduced. For a time, he considered taking service in the army of the Republic of Venice but he finally resolved to remain in Saxony.

On January 1 1775, Benekendorff was appointed inspector of the Saxon cavalry.

In 1778, Benekendorff was instructed to reorganize the Saxon cavalry but he had to cede his cuirassier regiment. In the War of the Bavarian Succession (1778-79), he took command of two dragoon regiments and was placed under the overall command of the Prussian Lieutenant-General Lentulus.

In 1779, after the war, Benekendorff returned to his function of general inspector of the Saxon cavalry. The same year, he was appointed commander of the entire Saxon cavalry.

On November 28 1788, Benekendorff was appointed Chef of the Garde du Corps.

Benekendorff died on May 5 1801 in Dresden after 68 years of service in the Saxon Army.