In 1652 a small force, consisting of an ensign and 30 men, was allowed to be employed by the East India Company, as a guard of honour. This little band may be looked upon as the nucleus of the army retained by the Company in the Bengal Presidency.

In the early days of the East India Company, the officers in their service were appointed by the "Court of Directors;" their only requirements being good health, courage, and common sense. Recruits were acquired by means of press-gangs, who were paid a handsome commission on the number of men engaged. Men were usually pressed into the service when in a state of intoxication; and they were frequently kidnapped, forcibly conveyed on board ship, and embarked before they were aware of their fate. On arrival in India escape was impossible; the soldiers were at the complete mercy of their masters.

Cadets served as private soldiers in what was called the "Cadets' company". A cadet took service for his life; and if he found it necessary, on account of ill health, or from any other cause, to absent himself from the country, he was deprived of his commission.

In 1742, a detachment of European infantry (1 ensign, 2 sergeants, 4 corporals and 14 privates) was sent from Bengal to Bombay.

By 1751, the Bengal European Infantry consisted of five companies.

In February 1752, one company was sent from Madras to Bengal and, under Captain Clive, took part in the action of Coveprauk. This company then proceeded to Trichinopoly and was finally incorporated in the Madras European Battalion.

In 1756, the Presidency of Bengal had four companies of European infantry under Captain Commandant Minchin and Captains Clayton, Buchanan, and Grant; and one company of European artillery, as well as some hundreds of Native soldiers. In addition to these regular forces, there were two companies of militia at the Presidency, which were composed of European and Armenian inhabitants. This force was officered principally by members of the civil service. In June, these four European companies took part in the defence of Calcutta. At the end of June, after the capture of Calcutta by Siraj Ud Daulah, the remnants of these various units took refuge at Fulta. In October, the British sent an expedition for the recapture of Calcutta under the command of lieutenant-colonel Robert Clive. On December 26, a few days after Clive's arrival, various detachments (remnants of Kilpatrick's force, remnants of the Bengal military force, volunteers and sailors) were collected together in a camp pitched to the eastward of the town of Fulta. A few days afterwards, they were formed, under Major Kilpatrick's supervision, into one battalion, which was then called "The Bengal European Battalion." Among the officers of this new battalion were captains Dugald Campbell, Mills, Dickson, and John Meadows; and lieutenants Cudmore, Smith, Wedderburn and Le Beaume.

During the Seven Years' War, the battalion was under the command of:

The barracks which had been in Fort William had been destroyed during the occupation of Siraj Ud Daulah's troops, the materials having been employed to construct an Islamic mosque, which was, under the nawab's orders, erected in the centre of the Fort. The European troops, therefore, were quartered in the 'Play-House' and dwelling-house of general Alsop, and in the upper part of the horse stables which had, under the orders of the Council, been put into repair and adapted for the purpose.

In March 1757, the battalion took part in the expedition against Chandernagore. The place surrendered on March 23. By mid June, the ranks of the Bengal European Battalion had been considerably augmented by a great many of the French prisoners captured at Chandernagore, released on condition of their taking service with the British. There were also many Dutch, some Germans, and other foreigners, who similarly joined the ranks of the battalion. Some sailors of Kent (70), their ship having been condemned, also enlisted for military service. On June 13, the battalion was part of Clive's army who undertook its famous campaign in Bengal. On June 16, a detachment of the battalion took part in the capture of the fort of Kutwah (present-day Katwa). On June 23, the battalion fought in the battle of Plassey. During the remainder of the year, the battalion was for the most part divided into separate commands. Two companies accompanied Major Eyre Coote in his fruitless pursuit of M. Law and his French followers; who, finally taking refuge in Oude, were protected by the nawab of that country. On September 14, Coote's detachment, after an arduous and hazardous march through an unknown and hostile country, returned to Murshidabad and was stationed at the factory of Cossimbazar; whilst the rest of the battalion was ordered down country to Chandernagore and Calcutta, where it remained for several months in quarters. In October, Major Kilpatrick, commanding the Bengal troops died. On November 17, Clive embarked in boats at Chandernagore with 400 Europeans and 1,300 Sepoys to come to the rescue of Mir Jafar at Murshidabad. On November 30, Clive was joined at Murshidabad by the two companies of Bengal European Infantry previously stationed at Cossimbazar. He was now at the head of 550 Europeans, including the company of artillery, and the 1st and 2nd battalions of the Bengal Sepoys.

In May 1758, Lieutenant-Colonel Forde succeeded Kilpatrick at the head of the Bengal troops. Soon afterwards, a large body of recruits arrived from Great Britain to replenish the depleted ranks of the European units stationed at Calcutta and Chandernagore. Furthermore, when the 39th Foot was ordered to return to Great Britain, nearly all the detachment volunteered for the Bengal European Regiment. Finally colonel Clive, finding it inadvisable to send back the detachments of the Bombay (2 coys) and Madras (5 coys) European Regiments, at their own request, incorporated these also with the Bengal European Regiment. This amalgamation was carried into effect on September 1. On October 12, the five coys of the right wing of the regiment were part of the British force which embarked for operations in Deccan. On December 9, these coys played a decisive role in the victorious Battle of Condore and in the ensuing attack and capture of the French camp.

From January to April 1759, the 5 coys of the right wing of the regiment took part in the expedition against Masulipatam. In the night of April 7 to 8, they were among the troops who stormed and captured the fortress. Meanwhile from February 25, the 5 coys of the left wing, which were still based at Calcutta and Chandernagore, took part to the relief of Patna. In May, when Clive took the road to return to Calcutta, he left 1 coy of the regiment under captain Cochrane along with 5 coys of Sepoys to garrison Patna. The 4 remaining companies were back at Calcutta by early June. In October, 200 recruits joined the headquarters. In November, Forde returned to Calcutta just in time to join Clive's forces to contain the Dutch operations in Bengal. On November 25, the left wing of the regiment fought in the victorious combat of Badara. In December, captain Fischer landed in Bengal with the right wing of the Bengal European Regiment, much reduced by the operations in Deccan and the expedition against Masulipatam. Furthermore, after the combat of Badara, a number of Europeans, Dutch, French, and Germans, made prisoners at this combat, were drafted to the regiment, bringing it up to its full strength.

In 1760, the regiment took part in the operations in Bengal. About 300 men of the regiment took the field against Shah Alam II. Furthermore, at the request of the nawab of Bengal, 200 men of the Bengal European Regiment were permanently quartered at Murshidahad for the protection of his capital. At the end of January, a company of the regiment was part of the garrison of Patna. On February 9, this company fought in the combat in front of Patna as part of Ram Narian’s force which was severely defeated. All European officers of the company to the exception of Dr. Fullerton were killed during the combat. Soon Patna was relieved by major Caillaud’s force. On February 22, several companies of the regiment took part in the victorious battle of Seerpore. In March the detachment of the regiment garrisoning Murshidabad was increased to 500 men. On the morning of April 7, part of the regiment were at the attack on the emperor’s camp at Belkoss. On April 25, a detachment of the regiment took part to the third relief of Patna. On June 16, part of the regiment fought in the victorious combat of Beerpore against Kuddum Hassain. At the end of the year, before leaving Bengal, colonel Caillaud made some changes in the organization of the Bengal European Regiment, now 1,200 strong, many of the soldiers being French, Dutch, and Germans who had purchased their freedom by consenting to serve in the ranks of the regiment. With the approval of the Council, 2 troops of dragoons and 1 of hussars were raised; the troopers being taken from the Bengal European Regiment, which were now in consequence only 1,000 strong, including 2 grenadier companies. The newly-raised cavalry were officered from the infantry, each troop of dragoons having 1 captain, 2 lieutenants, and 1 cornet, and the hussar troop, called "The Body Guard," having 1 lieutenant and 1 cornet only. The experiment of mounting infantry soldiers and employing them as cavalry did not prove a success, on account of the smallness of the underbred Bengal horses, which were not up to the weight of the British troopers. A body of Moghul horse, found to be far more efficient, was employed about this time with the British army. However, no European officers were attached to the native cavalry.

In 1761, the regiment took once more part in the operations in Bengal. On January 15, it fought in the combat of Suan against the army of the Mughal emperor Shah Alam II and a small French contingent. 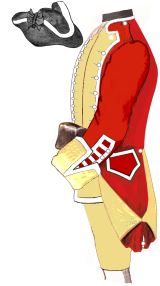 Uniform in 1757 - Source: Richard Couture from a template by Frédéric Aubert

Troopers were armed with with a "East India" flintlock musket, a bayonet and a sword.