During the War of the Polish Succession, the regiment served on the Upper Rhine in 1734.

On December 16 1740, the regiment was transformed into a musketeer regiment.

During the War of the Austrian Succession, the regiment served in Silesia in 1741. On May 17 1742, it fought at the battle of Chotusitz. In 1745, it took part to the battles of Hohenfriedberg (June 4) and Kesselsdorf (December 15), distinguishing itself in the latter battle.

The numbering system (Stammliste) was first used by Leopold I., Fürst von Anhalt-Dessau (Der alte Dessauer) in the Dessauer Spezifikation from 1737. Around 1780 the numbers were used in the printed Stammlisten, still with some variations for the fusilier regiments. It became official by "Cabinets-Ordre" from October 1, 1806. The present infantry regiment was attributed number 30.

The regiment was disbanded in November 1806 after the capitulation of Ratekau. 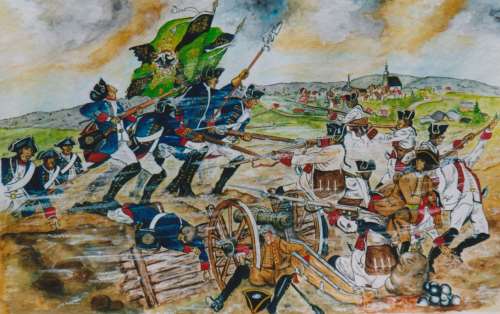 On the eve of the Seven Years' War, the regiment was still garrisoning Anklam and Demmin.

On August 26 1756, when the Prussian Army proceeded to the invasion of Saxony, the regiment was part of the left column led by the Prince of Bevern. This column had concentrated in the area of Lübben, then advanced through Lusatia by Hoyerswerda and Bautzen, to Hohenstein (Sept. 8) then to Lohmen north of the Elbe near Pirna. On October 1, the regiment took part in the Battle of Lobositz where it was assigned to the Brigade of Lieutenant-General Prince von Bevern. It lost 275 men in this battle. On October 2, the second battalion of the regiment was sent forward to occupy the village of Sulowitz. On October 19, the same battalion was ordered to escort the bakery to Linai.

In the Spring of 1758, the regiment took part in the failed Prussian invasion of Moravia. On October 14, it fought in the Battle of Hochkirch where it was initially deployed in the first line to the left of the village of Hochkirch. Personally led by Keith, the regiment recaptured the Prussian battery near Hochkirch and pushed the Austrians back before being overwhelmed by number and forced to retire. Keith was killed during the action. Around 7:00 a.m., the rallied regiment supported Itzenplitz Infantry during its attack and temporary recapture of the village of Hochkirch. During this battle, the regiment suffered heavy casualties (around 50%).

On September 2 1759, the regiment, as part of Zieten's Corps, fought in the Combat of Sorau.

Privates were armed with a musket, a bayonet and a straight bladed pallasch.

Uniform of the officers in 1770 (unchanged since the SYW) - Source: Anonymous work of 1770

The pikes used as staffs for the colours were (probably) black.