The two following plates have been made by the famous French uniformologist Michel Pétard and originally published in the magazine Uniformes Number 20. Mr. Pétard has kindly authorised us to reproduce these plates in our article but retains full copy right on them.

Two companies were formed in 1682 to serve aboard the newly created bomb-ketches; one company at Brest and another one at Toulon. In 1694, a third company was formed in Rochefort.

The bombardiers de la Marine were elite troops and were not submitted to military exercices. They did not consider themselves as soldiers but rather as experts of naval artillery in general and mortars in particular.

In 1774, Choiseul reinstated the unit of Bombardiers de la Marine. These new companies had blue uniforms.

In 1786, the three companies of Bombardiers de la Marine were disbanded for good and replaced by the Canonniers-matelots (sailors-gunners).

We found no specific mention of service of this unit during the Seven Years' War. 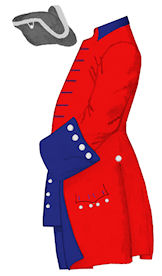 Armaments consisted of a musket, a bayonet and a sabre.

Sergeants had wide silver braids on cuffs and pockets of the coat and waistcoat (see Figure 9 of the rightmost plate). They usually carried partizans.

Corporals had narrow silver braids on cuffs and pockets of the coat (see Figure 8 of the rightmost plate which has been left uncoloured to show the details). They also had cordonnets around buttonholes.

Officers wore a uniform similar to the one of the bombardiers but wore white stockings.

Officers were usually armed with a sword and a spontoon.

These companies probably did not carry any colour.

This article is mostly a translated and abridged version of the following article: Pétard, Michel: L'homme de 1755 – Le bombardier de marine, in Uniformes, No. 20