On January 18, 1757, King Louis XV accepted the offer made by the Prince de Bouillon to raise a regiment in his principality and in the neighbouring cantons of the Ardennes to serve in France as a foreign unit. The regiment was created on February 1, 1757. It was also known as "Wallon Étranger".

The regiment consisted of two battalions of 680 men each.

On December 21, 1762, the regiment was reduced to one battalion.

During the Seven Years' War, the regiment ranked 118th and was under the nominal command of:

During the Seven Years' War, the regiment was under the effective command of its successive colonels-commandants:

By August 1 1757, the regiment was garrisoning Mézières and Charleville in Champagne.

In 1758, the regiment served on the Rhine where it was usually quartered in Düsseldorf.

On April 11, 1759, the regiment was part of a corps of 14 bns and 4 sqns detached from the army of the Marquis d'Armentières under the command of the Comte de Saint-Germain to reinforce the Duc de Broglie who was threatened by the advance of the Allied army. Saint-Germain marched towards the Lahn River and arrived at Königstein on the evening of April 13, too late to take part in the Battle of Bergen. On April 14, he effected a junction with Broglie's Army. In June, during the French offensive in Western Germany, the regiment was part of the main army under the command of the Marquis de Contades and was deployed in the second line of the infantry centre. On August 1, during the Battle of Minden, the regiment garrisoned Minden, occupying the ramparts and the 3 bridgeheads. The Captain Marquis de Foudras was wounded during this battle. Before the end of September, one of the 2 battalions of the regiment was sent back to France.

During the campaign of 1760 in Western Germany, by May 23, the regiment was part of the second line of the Army of the Upper Rhine under the Duc de Broglie. It was placed under the command of the Prince de Croy, forming a brigade with Horion Infanterie and Vierzet Infanterie. On August 10, the regiment contributed to the capture of Ziegenhain. On September 13 at daybreak, the regiment was part of M. de Stainville's Corps who was marching towards Frankenberg when it clashed with a retiring Allied corps between Rhadern and Münden/Ork. Both forces were separated by a wood and a small stream flowing into the Eder. Stainville reinforced his left with Bouillon Infanterie (2 bns) placed in the Castle of Lichtenfels. Combat began around 10:00 a.m. M. de Scey at the head of Du Roi Brigade and M. de Melfort with the Légion Royale advanced. The Allies occupied positions on a steep hill. Nevertheless Auvergne Infanterie stormed these positions on the double. Fersen counter-charged the dragoons of the Légion Royale at the head of his cavalry but was made prisoner with some of his men. Then, the grenadiers and chasseurs of the brigades along with the dragoons of Légion Royale; du Roi, Auvergne, Bouillon and Royal-Pologne infantry brigades pursued the Allies up to the village of Neukirchen near Sachsenberg. Bülow was forced to abandon some guns to pass the defiles. In this action M. de Stainville took 400 prisoners, 8 pieces and considerable baggage. On October 2, Broglie sent M. d'Aubigny's detachment (6 bns and 4 sqns, including this regiment) from Stainville's Corps towards the Lower Rhine. On October 11, Aubigny's detachment joined the Chasseurs de Fischer between Neuss and Meerbusch. On October 16, during the Battle of Clostercamp, the regiment occupied Rheinberg.

During the campaign of 1761 in Western Germany, by February 9, the regiment served with the Army of the Lower Rhine and was posted near Kleve. On the morning of July 3, when the Allied Army led by Ferdinand of Brunswick appeared in the plain of Dortmund behind Soubise's right wing, Major Scheiter launched an attack against the positions of the Prince de Croy (18 bns and 8 sqns) at Schwerte and Westhofen on the Ruhr. The Allies forced all fords and surrounded de Croy's positions. A French detachment under M. de Wietenghoff held its position at the bridge until it ran out of ammunition. For one hour, M. de Morlière and the Prince de Croy maintained their positions. They were now surrounded by 5 Allied sqns. The French Royal-Piémont Cavalerie and Des Salles Cavalerie under M. de Fusée then launched several charges. Meanwhile, II./Bouillon Infanterie ran 4 km before charging the Allies at the point of the bayonet. Scheiter was finally driven back. On July 16, the regiment was present at the Battle of Vellinghausen where it was deployed in the second line of the infantry centre of Soubise's Army. On August 30 in the morning, a strong Allied column came out of Münster and marched on Groß Schonebeck on the Stever (near Nottuln) defended by Chapt Dragons. At 9:00 a.m., informed of the attack on his advanced posts, Soubise ordered M. de Montbarey to support Chapt Dragons with the grenadiers and chasseurs battalions of Briqueville Infanterie, La Couronne Infanterie, and Bouillon Infanterie along with 2 artillery divisions. After a short engagement, the Allied infantry stopped while the Allied cavalry retired. The Allies then retired to Münster. On September 20, when Soubise advanced to Coesfeld, the regiment remained with Chevert at Recklinghausen. In November, the regiment was posted in the districts of Meurs, Ürdingen, Linn, Krefeld and Rheinberg.

For the campaign of 1762 in Western Germany, the regiment served with the Reserve on the Lower Rhine. On April 19, the regiment marched to Hattingen. By May 29, the regiment formed part of M. de Saint-Chamans's Corps stationed at Rees. On July 21, as part of d'Auvet's column, the regiment left Dortmund to make a junction with the Army of the Upper Rhine. D'Auvet reached Essen on July 23; Sterkrade on July 24 and Wesel on July 25. On November 20, the regiment was instructed to return to France where it was placed in garrison at Rocroi and Philippeville.

In May 1763, the regiment was transferred to Montmédy. 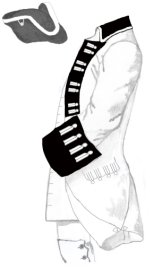 Ordonnance colours: a white cross, their first and fourth cantons were white, their second and third black. These ordonnance flags remained unchanged from 1757 to 1775.