The regiment was created by an ordonnance issued by the Governor of the Spanish Netherlands on December 18 1694. In 1695, the regiment was transferred to Catalonia. On November 25, the ten companies, under the command of the Count de Tilly, were incorporated in the Spanish Army.

In 1714, the regiment was sent to reinforce the troops besieging Barcelona.

In 1715, one squadron of the regiment joined the expedition against Majorca. In 1717, another squadron was sent to Sardinia.

In 1718, two squadrons of the regiment took part in the expedition for the reconquest of Sicily. They fought in the Combat of Sfera-Caballo. In 1719, the rest of the regiment served on the frontier between Aragon and Catalonia and contributed to the recapture of the place of Seo de Urgel.

The regiment was disbanded in November 1762 and incorporated into Alcantara Cavalry.

In 1762, the regiment joined the army assembling for the planned invasion of Portugal. It was deployed on the left of the first line. In June, it took part in the siege and capture of Almeida. It later participated in the capture of Bragança and Chaves. After a victorious engagement at Fundão, it took up cantons in Villar del Rey. 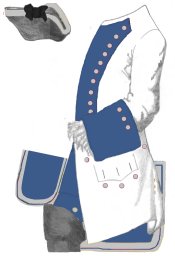 The regiment had the privilege to have a cymbal player dressed in the Turkish fashion to lead its musicians. This privilege had been granted after the combat of Sfera-Caballo in Sicily fought on April 21 1720 where the regiment attacked and defeated the Austrian Starhemberg Cavalry, capturing a musician dressed and equipped in this manner.

The regimental standards were made of crimson damask embroidered and bordered in gold. The centre device consisted of a silver escutcheon carrying two red rings.