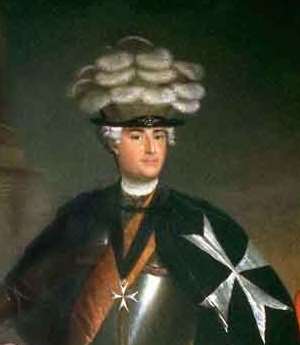 Margrave Carl dressed as Grand Master of the Order of Saint John, detail of a portrait of 1737 - Source: Wikipedia

Karl Friedrich Albrecht was the grandson of Elector Frederick William of Brandenburg and son of Margrave Albrecht Friedrich zu Brandenburg-Schwedt. Consequently, he was the cousin of Frederick II.

Karl Friedrich Albrecht was never married but he had a mistress, Dorothea Regina Wuthe, who was raised to the nobility on 14 January 1744 and given the title of "Lady of Carlowitz". On December 12 1731, he had one daughter from her.

In 1729, Karl Friedrich Albrecht became colonel in the regiment of his father.

In 1731, at the death of his father Karl Friedrich Albrecht succeeded his as Margrave of Brandenburg-Schwedt. The same year, he also became Grand-Master of the Order of Saint John. In June, he received his own infantry regiment in the Prussian Army: the Markgraf Carl Infantry.

In 1740, Margrave Karl was promoted major-general.

During the War of the Austrian Succession, Margrave Karl distinguished himself at the capture of Glogau (present-day Głogów), at the Battle of Mollwitz (April 10, 1741) and at the Battle of Chotusitz (May 17, 1742). In 1742, he was promoted lieutenant-general. In the spring of 1745, he took command in Upper Silesia.

In 1747, Margrave Karl was promoted general of infantry.

In August 1756, Margrave Karl led one of the column of Frederick's Corps during the invasion of Saxony. By mid September, Margrave Karl's Corps (15 bns, 2 grenadier coys and 20 12-pdrs) who had previously encamped near Dresden, replaced Ferdinand of Brunswick at Cotta. On September 28, when Frederick quit Pirna Country to march against the Austrian army assembling on the Bohemian border, he left the remainder of his corps under the command of Margrave Karl to continue the blockade the Saxon Army entrenched around Pirna. On October 13 at 8:00 a.m., Margrave Karl, informed of the retreat of the Saxon Army, sent forward part of his corps and took position on the Height near Himmelreich. He also instructed Prince Moritz to immediately leave his positions at Gross-Sedlitz and Gottleuba to pursue the retreating Saxon troops. On October 14, Margrave Karl sent Normann Dragoons to reinforce the Prussian positions on the Lilienstein. On October 15, the entire Saxon Army surrendered.

In the Spring of 1758, Margrave Karl took part in the invasion of Moravia. At the beginning of May, he commanded the corps (8 bns, 16 sqns) encamped at Starnau. By May 11, his corps (9 bns, 19 sqns) was encamped near Mährisch Neustadt. On June 17, Frederick instructed Margrave Karl to take a new position on the left bank of the March River and to cut communications between Olmütz and Prerau. Margrave Karl (6 bns, 3 sqns) immediately marched from his camp at Mährisch Neustadt to Bauniowitz (probably Bohuňovice). On June 18, his Corps moved to Bistrowan. On July 6, during the retreat of the Prussian army, Margrave Karl was left behind at Zwittau with the main body to wait for the train while Frederick marched to Leuthomischl with 6 bns and 3 sqns. On July 7, Margrave Karl marched at the head of the main body to Leuthomischl. On August 10, Frederick left Grüssau and marched to Landeshut (present-day Kamienna Góra), heading for Frankfurt an der Oder, while Fouqué and Zieten advanced to Halbstadt (present-day Meziměstí). The Prussian army left behind in Silesia was placed under the command of Margrave Karl, with Fouqué as second in command with two corps (about half the late Olmütz Army). On August 28, during the Austrian invasion of Silesia, Margrave Karl was ordered by Frederick to leave Silesia and to join him north of Dresden to contain the Austrian invasion of Saxony. At the beginning of September, Margrave Karl led the Prussian Army of Silesia along the Bober towards Sagan. On September 9, he made a junction with Frederick's army at Großdobritz one march from Dresden. On October 14, Margrave Karl took part in the Battle of Hochkirch where he commanded the left wing. He was wounded during this battle. In mid-November, after the defeat at Hochkirch, Margrave Karl retired to Silesia with his army. On November 23, his army reached Naumburg (present-day Nowogrodziec) on the Queisse. On December 1, his army abandoned its cantonments at Naumburg and took its winter quarters.

By mid-August 1761, during the Austro-Russian campaign in Silesia, Margrave Karl was commanding part of Frederick's army at Losig. On August 16, Frederick instructed him to rejoin him at Nikolstadt with that part of his army. On August 17, the Corps of Margrave Karl took position with its right on the heights of Granowitz (present-day Granowice) and its left at Dromsdorf. Frederick's army then rapidly entrenched itself at Bunzelwitz.

The section on Margrave Karl's career between 1756 and 1762 is mostly derived from our articles depicting the various campaigns, battles and sieges.