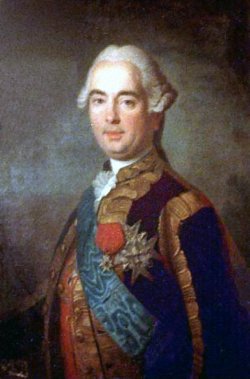 In 1734, during the War of the Polish Succession, Victor François de Broglie fought in Italy with his father (François-Marie, 1st Duc de Broglie) as captain in a cavalry regiment. He took part in the battles of Parma (June 29) and Guastalla (September 19). He soon obtained the colonelcy of Luxembourg Infanterie which he retained until 1736.

In 1741, at the beginning of the War of the Austrian Succession, Broglie took part in the campaign in Bohemia under the Maréchal de Saxe. On March 1, he was promoted aide-major général of the infantry. On November 26, he took part in the storming of Prague. On April 26 1742, he was promoted brigadier. On April 1 1743, he was promoted major-general of the infantry after being wounded twice. He served in Bavaria and Haute-Alsace. In 1744 and 1745, Broglie saw further service on the Rhine. On May 1 1745, Broglie was promoted maréchal-de-camp. On his father's death, he succeeded him as Duc de Broglie, he previously bore the title of Comte de Broglie. In 1746, Broglie took part in the campaign of Flanders under the command of the Maréchal de Saxe and was present at the Battle of Rocoux (October 11). In 1747, he served once more in Flanders, taking part in the Battle of Lauffeld (July 2). In April and May 1748, he was present at the siege of Maastricht.

In 1757, at the beginning of the Seven Years' War, Broglie served under the Maréchal d'Estrées. On July 26, he was present at the Battle of Hastenbeck. He was then detached to the army of the Prince de Soubise. On November 5, he took part in the Battle of Rossbach where a Franco-Imperial army suffered a disastrous defeat. Broglie managed to keep his troops united and to retire towards Hanover.

In 1758, Broglie commanded the vanguard of Soubise's Army in Hesse. The hostility of the Maréchal de Belle-Isle prevented him to assume the command of an army. On July 23, Broglie at the head of Soubise's vanguard defeated the Prince Ysenburg in the Combat of Sandershausen.

In 1759, Broglie served in Germany under the Marquis de Contades. On April 13, Broglie won a victory over Ferdinand of Brunswick at the Battle of Bergen. On August 1, the French Army of the Lower Rhine under Contades was defeated in the Battle of Minden by the Anglo-Hanoverians. In this battle, Broglie commanded the right wing which made a very timid attempt against opposing Allied forces. After this defeat, Louis XV replaced Contades by Broglie as commander-in-chief of this army. On December 16, Broglie was promoted by the king to the rank of Maréchal de France. He also received the title of prince of the empire from Emperor Francis I.

On July 16 1761, Broglie was defeated in the Battle of Vellinghausen. Considering that he had tried to win the battle without waiting for Soubise as agreed previously, the French Court recalled him to France and he fell into disgrace.

During the 1770s, Broglie was first governor of the Trois-Évêchés and then of Alsace.

In 1778, Broglie returned to active service to assume command of the troops assembled to operate against Great Britain.

In 1789, at the beginning of the French Revolution, Broglie commanded troops assembled around Versailles by Louis XVI. On July 11, Louis XVI appointed him secretary of state to war, a position that he retained only a few days. On July 16, Broglie emigrated.

In 1792, Broglie commanded the "Army of the Princes" who operated in Champagne during the Austro-Prussian invasion. His eldest son, Charles-Louis-Victor, Prince de Broglie, died during the Terror.

Broglie died at Münster in 1804, refusing to return to France.