This regiment was initially the first battalion of Bourdon Infantry, a regiment originally counting three battalions, which had been raised in 1741. In 1745, Bourdon, himself, deserted to the French and his former regiment was split into three distinct regiments: Count Kielmannsegg (later 12A), Brunck (later 12B) and Hohorst (later 13A).

In 1747, during the War of the Austrian Succession (1740-48), the regiment was sent to the Netherlands. In February 1748, it took part in the attack of a French convoy sent from Antwerp to Berg-op-Zoom. In March, it was at the affair of Rosenthal.

In 1748, after the Treaty of Aix-la-Chapelle, the regimen returned to Hanover where it garrisoned Hameln.

From 1764, the regiment garrisoned Harburg.

On April 24, 1757, the regiment set off from Hameln and joined the vanguard of the Allied army. On May 1, , during the French invasion of Hanover, it encamped at Bielefeld. On June 13, when the army set off from Bielefeld, the regiment was allocated to the vanguard under Lieutenant-General von Spörcken . On July 20, it encamped near Hameln. On July 26, the regiment took part in the Battle of Hastenbeck where it was deployed in the first line of the left wing to cover a large battery. After the battle, it retired to Behrensen, forming Spörcken’s rearguard. It rejoined the army at Lüne. On August 22, as part of Wutginau’s Corps, it went to Rethem on the Aller. On August 26, it rejoined the main army. After the capitulation of the Allied army at Klosterzeven, the regiment encamped in the region of Stade. On December 26, during the Allied counter-offensive in Hanover, the regiment, who had advanced from Celle towards Uelzen, reached Ebstorf. On December 29, it reached Solrau with Oberg’s Corps. It was then detached to Visselhövede under Colonel von Dreves.

On January 1, 1758, the regiment surprised a French detachment, taking most of them prisoners. On May 26, it was with Ferdinand's main force in the camp of Nottuln. On May 31, it accompanied Ferdinand in his offensive on the west bank of the Rhine. The regiment was initially left at Rees under Major-General von Brunck to guard the bridgehead. On June 23, the regiment took part in the Battle of Krefeld where it fought on the left wing under the command of Lieutenant-General von Spörcken. During the retreat across the Rhine, the regiment was allocated to the rearguard under the command of the Hereditary Prince of Brunswick. Near Kleve, together with Kielmannsegg Infantry, it drove back an attack conducted by Caraman Dragons, Harcourt Dragons and Apchon Dragons. On October 17, the regiment took part in an action near Soest. On November 18, it marched to its winter-quarters at Fürstenau in the Bishopric of Osnabrück.

From February 2, 1759, the regiment was posted in the town of Lohne. For the campaign of 1759 in Western Germany, the regiment was part of the Allied Main Army under the command of Duke Ferdinand of Brunswick. It was initially posted at Hamm. On August 1, the regiment took part in the Battle of Minden where it was deployed in the second line of the 4th column under Major-General Wissembach. Its brigade supported the surprise advance of von Spörcken’s Brigade. After the pursuit of the French army through Hesse, the regiment encamped at Crosdorf. On October 27, it joined the corps of Lieutenant-General von Gilsa who covered the siege of Münster. In November, after the surrender of Münster, the regiment joined the expedition against Elberfeld. It then took up cantonments at Buderich. On December 23, the regiment came out of its cantonments and joined Major-General von Scheiter’s Corps at Crosdorf. This corps supported the expedition against Dillenburg.

In January 1760, after the capture of Dillenburg, the regiment formed part of the garrison of the town. It then retired to Günterot to take up its winter-quarters. On January 20, it was transferred to new winter-quarters at Münster. On June 20, the regiment joined Spörcken’s Corps and encamped at Dülmen. It then took position between Volkmissen and Arolsen. In the night of July 24 to 25, during the French campaign in Western Germany, as part of Spörcken's Corps, the regiment was forced to retire on Wolfhagen to avoid encirclement. Ferdinand immediately detached the Hereditary Prince of Brunswick to reinforce Sprörcken's Corps, harassed by a French Corps under the Comte de Broglie. Spörcken's Corps spent the night under arms near a narrow defile between Fishbach (unidentified location) and Wolfhagen, then Spörcken sent his cavalry in a wide turning movement of about 20 km around a hill. His infantry then passed the defile but before the Allied cavalry could join it, the rearguard (Post Infantry (1 bn), Estorff Infantry (1 bn) and 400 picquets) was attacked by French horse and foot. The Allied rearguard managed to gain a rising ground where it held for 2.5 hours till the arrival of Spörcken's cavalry (7 Hanoverian sqns and 2 Hessian sqns under Breitenbach). This cavalry attacked the French in flank and put them into confusion. During this action, the French lost about 1,000 men, the Comte de Vair was killed and the Comte de Belsunce and M. de Comeyras wounded. The Allied lost 200 men. A few days later, on July 31, the regiment took part in the Battle of Warburg where it was deployed in the first line of the right wing in front of Ossendorf under the command of Lieutenant-General Hardenberg. In this battle, the regiment lost 70 men, including Captain Brunck, Lieutenant von Goldacker and Lieutenant von Trott all wounded. It then encamped at Bühne where it remained till the end of the campaign. On December 11, it took up its winter-quarters in Vörden.

On February 7, 1761, the regiment came out of its winter-quarters to take part in the Allied campaign in Hesse. It was attached to the corps of Lieutenant-General Count von Kielmansegge who formed the vanguard. On April 19, the regiment took up quarters at Amelsbüren near Münster. During the following campaign in Western Germany, the regiment was allocated to the corps of the Hereditary Prince of Brunswick. By June 1, it was at the camp of Schapdetten. On June 27, it joined the main army at Camen. When this camp was almost surrounded by the French, it retired towards Unna. It finally joined the main army near Buderich not far from Werle. On July 12, the army retired behind the Lippe. On July 16, the regiment took part in the Battle of Vellinghausen where it was deployed on the right wing under the Hereditary Prince. After this battle, the regiment was allocated to the corps of Lieutenant-General von Bock. On December 12, it took up its winter-quarters in the region of Münster.

N.B.: the regiment may have been present at the Combat of Langensalza on February 15, 1761 but sources disagree. In Wissel’s work, there is no mention of this battle in the regimental history.

At the end of April 1762, the regiment joined the Corps of the Hereditary Prince of Brunswick for his expedition against Elberfeldt. On May 3, it drove out the Dragons-chasseurs de Conflans from the heights near this town, capturing 40 prisoners. On May 4, it acted as rearguard during the retreat and suffered some losses. The same month, during the last campaign in Western Germany, the regiment was attached to the Corps of the Hereditary Prince of Brunswick operating in Westphalia. By June 4, it was at Buldern. On August 30, the regiment took part in the Combat of Nauheim where it was attached to Lieutenant-General von Hardenberg's Column. Around 11:00 a.m., the regiment was part of those who passed the Wetter to attack the Johannisberg. By September 11, the regiment was at Homburg/Ohm.. On September 17, it was at Röttigheim near Amöneburg. On September 21, the regiment took part in the Combat of Amöneburg where 200 of its men, under Lieutenant-Colonel Wense, occupied the redoubt near the Ohm River while the rest of the regiment was with Zastrow's Corps occupying the ground immediately before the Brücker Mühle. In this affair, the regiment lost 70 men, including Ensign Stephan, killed; and Lieutenant-Colonel von der Wense, wounded. On September 22, the regiment returned to its former post at Röttigheim. On October 10, it formed part of a corps under Major-General von Ahlefeld who marched towards Kassel to take part in the siege of the place. During this siege, the regiment lost 80 men. It then rejoined the main army and took up cantonments at Schweinburg and Röttigheim. On November 20, it marched towards its winter-quarters. On December 1, it took up quarters at Telligte where it remained until December 24.

From January 9, 1763, the regiment was assigned to the garrison of Lüneburg. 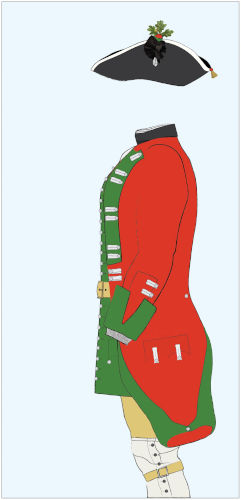 The drum pattern had hoops in alternating green and red diagonal stripes, white drum cords over a brass drum with the Arms of Hanover in the centre. The belt was red laced light green.

The colours depicted in this section were issued from 1749 to 1783.

Regimental Colour: light green field, rocks emerging from the sea, clouds, lightening and gales, surrounded by palm leaves, surmounted by a Royal Crown, white scroll, motto TU NE CEDE MALIS, cyphers and crowns at the edges of the flag. Hereafter, we present an illustration from the Reitzenstein Sammlung, dating from circa 1761 (left) and the interpretation of Hannoverdidi (right).