The regiment was created on February 10 1734 from a unit initially raised in Barcelona by Don Bartolomé de Santa Vastelica under the name of "Regimiento Nuevo de Córcega". It consisted of 13 companies.

On July 8 1736, the regiment was ordered to sail to Ceuta on the coast of North-Africa to defend the place. On September 21, it was reviewed by Inspector Don Pedro de Vargas. It was soon recalled to Spain in mid-April 1737 and landed at Cádiz on May 27. On September 15, the regiment was transformed in a Walloon regiment and renamed "Regimiento de Bruselas" under Colonel Angel Alberto de Van den Belde.

On September 14 1752, the regiment embarked for the island of Majorca.

On March 2 1815, the regiment was disbanded and incorporated in Ultonia Infantry. 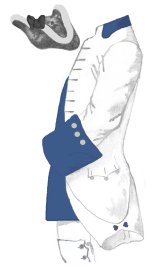 No information available yet about the colours of the Walloon regiments in the Spanish service.