The regiment was raised in Andalusia on January 31 1703 by Baltasar de Moscoso at his own expense. It was first reviewed at Santa Maria, near Cádiz, on May 4 1703.

In 1704, during the War of the Spanish Succession (1701-13), the regiment took part in the invasion of Portugal, in the capture of Alegrete and Portalegre, in the engagement of Monsanto and in an ambush in the vicinity of Olivenza. In 1705, it continued to serve in Extremadura and surprised two Portuguese detachments in the villages of Aldeia da Venda and Vila Viçosa, taking prisoners an entire battalion and a squadron. It then participated in the relief of Badajoz. In 1706, it took part in the bombardment of Elvas; in 1707, in the blockade of Olivenza and in the siege and recapture of Ciudad Rodrigo; in 1708, in engagements near Jeréz de Caballeros and Almendral; in 1709, in the Battle of La Gudina. In 1712, the regiment was allocated to the Army of Extremadura.

After the war, the regiment took up quarters in the Province of Extremadura.

In 1719, during the brief war with France, the regiment was sent to Catalonia.

In 1727, the regiment joined the Army of Andalusia and took part in the unsuccessful siege of Gibraltar.

In 1738, the regiment was once more transferred to Catalonia where it occupied Torruella de Mangrí.

In 1741, at the beginning of the War of the Austrian Succession (1740-48), the regiment was selected for operations in Italy. In 1742, it sailed to Spezia but was immediately redirected to the Province of Dauphinée. In 1743, it operated in Savoy. In 1744, it took part in the Battle of Casteldelfino, in the siege of Coni, in the Battle of Madonna dell'Olmo and in the retreat to the County of Nice. In 1745, the regiment campaigned in Lombardy where he served in the division of General Aramburu which sallied from Castelnuovo Scrivia and occupied Casale Monferrato. It then took part in the capture of Lodi and Milan. During the retreat, it fought in engagements near Ottagio and at the the passage of the Tanaro and took part in the sieges of Tortona, Serravalle and Alessandria. In 1746, it fought in the Battle of Piacenza. In 1747, it returned to Spain.

In 1762, the regiment was selected to join the army assembling for the planned invasion of Portugal. It was allocated to the division of the Count de Maceda and, at the beginning of May, took up quarters in Ciudad Rodrigo. On June 5, it entered in Portugal. At the end of the campaign, on October 31, it took up quarters in Las Rozas. On November 14, it was transferred to Badajoz. 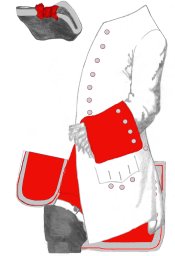