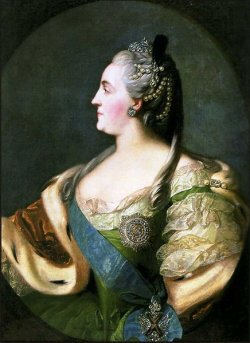 Catherine was the daughter of Christian Augustus, a general in the Prussian service commanding at Stettin, and of Johanna Elizabeth of Holstein-Gottorp. Her original name was Sophia Augusta Frederica.

Sophia Augusta Frederica was educated by French governesses and tutors.

On August 21 1745 at St Petersburg, Catherine was married to Archduke Peter who, despising the Russians, surrounded himself with Holsteiners. One of Peter's only interest lay in militaria. Their married life was not a happy one. For ten years the marriage was barren. However, Catherine gradually became and remained perfectly immoral in her sexual relations to men.

For some time after the marriage, the young couple were controlled by Empress Elizabeth who appointed court officials to keep a watch on their conduct. Before long, these custodians became the agents of Catherine's pleasures and ambition.

In 1746, Catherine's father succeeded as Prince of Anhalt-Zerbst. He died soon afterwards in 1747.

On October 2 1754, Catherine gave birth to the future Tsar Paul. After the birth of her son, she began to take an active part in political intrigues.

In 1758, Archduke Peter endeavored to turn Empress Elizabeth against Catherine and, for a time, she was in danger. Nevertheless, Catherine managed to reconquer her influence over the empress.

On January 5 1762, Empress Elizabeth died and Peter succeeded to the throne as Peter III. His relations with Catherine did not improve. On the night of July 13 to 14, Catherine, with the help of the regiments of the guard, led a coup against him and his Holsteiner followers and overthrew him. Catherine was proclaimed Empress of Russia as Catherine II. On July 18, Peter was assassinated by the Orlovs.

Catherine II ruled Russia until her death in 1796. For a time, she corresponded with Voltaire. During her reign she spent a fortune on her long series of lovers. She had a passion for writing and produced not only a mass of letters written in French, but pamphlets and plays, comic and serious, in French and Russian. Despite a certain tolerance for other faiths, she never allowed dissenters to build chapels. Nor did she seriously considered the emancipation of the serfs.

Catherine II's foreign policy was steadily aimed to secure the greatness and the safety of Russia. She initially adhered to the former tsar's alliance with Prussia. In 1770, she sent a fleet under Alexis Orlov into the Mediterranean to support a possible Greek upheaval against the Turks in Morea. However, she soon disengaged from this design when she realized that Great Britain and France opposed it. Along with Austria and Prussia, she took part in the partitions of Poland in 1772 and 1793. By the Treaty of Kuchuk-Kainarji of 1774, she obtained that Turkey would guarantee the rights of its Christian subjects and would allow Russia to interfere on behalf of a new Russian church in Constantinople. Furthermore, Russia acquired Southern Ukraine. In 1783, Catherine unilaterally annexed Crimea. In 1787, war broke out a second time with Turkey. In 1792, the Treaty of Jassy legitimized the Russian claim to Crimea.

The outbreak of the French Revolution stripped off the varnish of philosophy and philanthropy which she had assumed in earlier years when she became the main proponent of a crusade against France.

On November 9 1796, Catherine II was seized by a fit of apoplexy, and died on the evening of November 10.