The regiment was created on November 14 1691 for Philippe d'Orléans, Duc de Chartres and son-in-law of King Louis XIV; who would later become regent of the kingdom of France.

In 1701, the regiment received a second battalion.

After the death of the regent in 1723, the Duc de Bourbon transferred the regiment to the Marquis d'Estampes on January 1724. The regiment was then named Estampes until February 22 1737.

During the War of the Austrian Succession, the regiment was initially deployed on the border of Flanders in 1742. In 1743, it served on the Rhine. From 1744 to 1748, it then took part to successive campaigns in Flanders.

During the Seven Years' War, the regiment ranked 96th and was under the command of:

In 1756, the regiment was stationed at Honfleur.

In 1757, the regiment joined the Army of the Lower Rhine commanded by the Maréchal d'Estrées for the planned invasion of Hanover. At the end of June, it was at the camp of Bielefeld with d'Estrées' main corps. On July 26, the regiment was at the Battle of Hastenbeck where it was part of the centre under Contades. After the victory, the regiment encamped at Grosselsen near Hameln with the main body of the Army of the Lower Rhine from July 31 to August 2. After the Convention of Kloster-Zeven, it followed the main body, led by the Maréchal de Richelieu, who encamped at Halberstadt from September 28 to November 5. The regiment was placed in the centre of the first line. At the end of the year, it took its winter-quarters in the second line of the French Army at Northeim.

In February 1758, when Ferdinand of Brunswick launched his winter offensive, the regiment retired on the Rhine with the rest of the French Army. From March 30 to April 4, it was in the second line of Clermont's Army in the camp of Wesel on the Lower Rhine. In April, when Clermont redeployed his army along the Rhine, the regiment was placed in the second line at Kerken. After the successful crossing of the Rhine by Ferdinand's Army on May 31, the regiment retired towards Rheinberg where it joined Clermont's army on June 2. It remained in this camp, where it was placed in the centre of the second line, until June 12. On June 23, the regiment took part in the Battle of Krefeld where it was placed on the left wing of the second line under Saint-Germain. This division tried to stop the Allied outflanking manoeuvre and bore the brunt of the fighting, preventing for almost 3 hours the crossing of the ditch and repulsing three successive Allied attacks. After sustaining heavy casualties, it finally retired from the wood. In Mid August, after Ferdinand's retreat to the east bank of the Rhine, the regiment, as part of the Army of the Lower Rhine now under Contades, recrossed the Rhine to follow the Allied army. On August 20, it was encamped near Wesel where it was placed in the centre of the second line. At the beginning of October, the regiment was attached to Fitzjames' Corps which was sent to reinforce Soubise's Army in Hesse. On October 10, it was present at the Battle of Lutterberg where it placed on the right wing of the second line. However, it was not involved into any serious fighting during this battle. 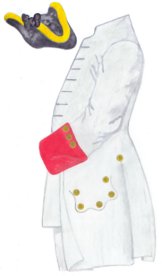