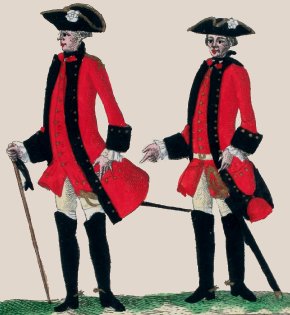 Colonel Général Cavalerie after the reorganisation of 1761 - Source: Raspe 1762 from Zahn's collection

This regiment was probably raised in 1631 by the Duke of Saxe-Weimar when Gustavus Adolphus of Sweden intervened in the affairs of Germany. The regiment was among the contingent who joined the French service in 1633. It was incorporated into the French Army on October 26 1635.

In 1651, the House of Turenne acquired the regiment. On April 24 1657, when Turenne became colonel-general, his regiment was renamed Colonel-Général Cavalerie and took precedence over all other line cavalry regiments and ranked first.

During the War of the Polish Succession, the regiment served on the Rhine in 1733, taking part in the siege of Kehl. In 1734, it was at Ettlengen and Philippsburg; in 1735, at Klausen.

During the Seven Years' War, the regiment ranked 1st among the line cavalry and was under the command of:

When the French cavalry was reorganised on December 1 1761, the regiment was increased to 4 squadrons, each of them consisting of 4 companies of 40 troopers, for a total of 640 troopers. The additional squadron came from I./Montcalm Cavalerie.

In 1756, the regiment was stationed at Strasbourg.

In June 1757, the regiment was with the Army of the Lower Rhine under the Maréchal d'Estrées encamped at Bielefeld. On July 26, the regiment took part in the Battle of Hastenbeck where it was among the cavalry of the right wing. After the victory, the regiment encamped at Grosselsen near Hameln with the main body of the Army of the Lower Rhine from July 31 to August 2. After the Convention of Kloster-Zeven (September 8), it followed the main body, led by the Maréchal de Richelieu, who encamped at Halberstadt from September 28 to November 5. The regiment was placed on the first line of the right wing. At the end of the year, it took its winter-quarters in Weener in Ostfriese, in the fourth line of the French army. 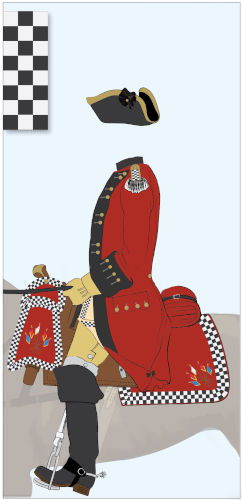 Troopers were armed with a carbine, two pistols and a sabre. They were also supposed to wear a breastplate during battle but this regulation was not always followed.

The horses of the troopers were of various colours to the exception of the colonel company who rode grey horses.

Trumpeters and kettle drummers probably wore a green uniform heavily laced with a braid consisting of 4 stripes (red, black, blue and light orange) and with yellow buttons. The kettle drummers wore a white turban with red and yellow plumes.