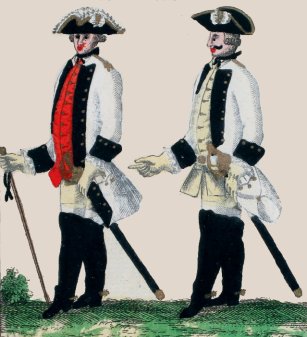 Commissaire général Cavalerie after the reorganisation of 1761 - Source: Raspe 1762 from User:Zahn's collection

The regiment was raised on May 15 1635 from old compagnies d'ordonnance. It always ranked 3rd among the French line cavalry regiments. On May 15 1654, the regiment became "Commissaire-Général Cavalerie".

During the Seven Years' War, the regiment ranked 3rd among the line cavalry and was under the command of its successive mestre-de-camp-généraux:

When the French Cavalry was reorganised on December 1 1761, the regiment was increased to 4 squadrons, each of them consisting of 4 companies of 40 troopers, for a total of 640 troopers. The 2 additional squadrons came from Beauvilliers Cavalerie which was incorporated into Commissaire Général Cavalerie.

In 1757, the regiment was initially stationed at Bitche. It then joined the Army of the Lower Rhine commanded by the Maréchal d'Estrées for the planned invasion of Hanover. At the end of June, it was at the camp of Bielefeld with d'Estrées's main corps. On July 26, the regiment took part in the Battle of Hastenbeck where it was among the cavalry of the right wing. After the victory, it encamped at Grosselsen near Hameln with the main body of the Army of the Lower Rhine from July 31 to August 2. After the Convention of Kloster-Zeven, it followed the main body, led by the Maréchal de Richelieu, who encamped at Halberstadt in Prussian territory from September 28 to November 5. The regiment was placed on the right wing of the second line. At the end of the year, it took its winter-quarters in the second line of the French army at Göttingen.

By July 1758, the regiment had joined Soubise's Army assembling near Friedberg in Hesse. On October 10, it was present at the Battle of Lutterberg where it was placed on the left wing of the second line. It was not involved into any serious fighting during this battle. 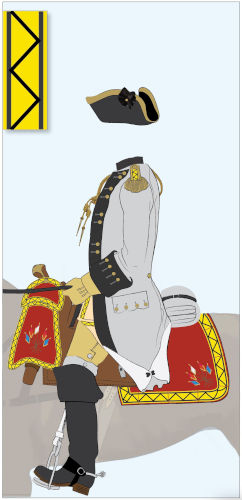 N.B.: the regimental standard is repeatedly described in various French États militaires (1740, 1741, 1753) as carrying une Ecrevisse sur terre on one side. This quite unusual device has conducted us to investigate this particular colour. PMPdeL found that the arms of the marquis de Bissy, who commanded this unit from March 1736 to April 1748, were three crayfishes on a gold field. For some reason, the centre device of the regimental colours seem to have retained these arms even after the marquis de Béthune and the marquis de Castries had succeeded Bissy. We have reconstructed the standard as per shown in Lienhart & Humbert.