The regiment was created on September 17, 1684 and formed with companies taken from Picardie Infanterie. It took the name of the Province of Nivernais. Indeed, expecting a coalition to soon form against France, Louis XIV raised 30 new regiments from September 1 to 30 for the defence of the various places of the realm. By raising one regiment a day, he avoided any problem of precedence among these new regiments. The regiment was given to Paul-Sigismond de Montmorency-Luxembourg, Comte de Luxe.

In 1733, during the War of the Polish Succession (1733-35), the regiment served in Italy. In 1734, it took part in the battles of San Pietro and Guastalla, distinguishing itself at Guastalla.

In 1736, the regiment returned to France.

In 1742, during the War of the Austrian Succession (1740-48), the regiment served in Flanders. In 1743, it was transferred to the Lower Rhine and took part in the Battle of Dettingen. In 1744, it was then sent back to Flanders where it participated in the capture of Ypres and Furnes; in 1745, in the siege of Tournai, in the Battle of Fontenoy, and in the capture of Termonde, Oudenarde and Ath; and in 1746, in the siege of Namur and the Battle of Rocoux. In 1747, the regiment was sent to Provence where it took part in the conquest of the County of Nice and in the defence of Genoa where it remained until the end of the war.

On the eve of the Seven Years' War, the regiment counted one battalion.

In 1759, the name of the regiment was once more changed to “La Marche-Prince.”

N.B.: not to be confused with the La Marche Regiment.

During the Seven Years' War, the regiment ranked 86th and was under the nominal command of:

During the Seven Years' War, the regiment was under the effective command of its successive colonels-lieutenants:

In 1775, the regiment was incorporated in Périgord Infanterie.

From 1756, the regiment was assigned to the guard of the coasts of Bretagne.

By August 1 1757, the regiment was stationed at Auray in Bretagne.

In 1762, the regiment garrisoned Bordeaux. 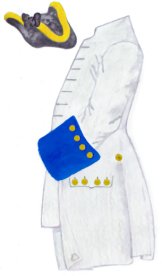 N.B.: Susane mentioned that during the period when it belonged to the Comte de La Marche, the regiment carried flag in the colours of the House of Conti (red and isabelle) without giving any additional details.