The regiment was raised on June 26 1762 for Prince Carl von Mecklenburg-Strelitz.

At the end of August 1762, the regiment left Lisbon to join Lippe-Bückeburg's army. During the campaign of 1762, was initially attached to the main Anglo-Portuguese army where its 3 troops were deployed in the first line of cavalry of the right wing.

The following description is based on an illustration in the article “The Portuguese Army - Seven Years War” published by Mike Kirby in the Seven Years War Association Journal, Vol. XII No. 3. Buttons are assumed to be made of brass. The uniform depicted on this illustration is quite similar to the uniform of the regiment after Lippe's reform of 1764. However, the cuffs are of a different style.

Since the regiment was created only in June 1762, we can reasonably assume that its uniform was quite similar to the 1764 uniform, but of course this is only a hypothesis. 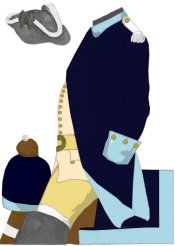 Officers probably wore uniforms similar to those of the privates with the following differences:

The exact pattern of the Portuguese colonel colours during the Seven Years' War is unknown (Kirby's article illustrates a simple white standard with the crowned arms of Portugal as centre device, but we do not know the exact date of this illustration).