The regiment (12 companies) was raised on February 9, 1735 but could trace its origin as far back as the Reconquista at the end of the 15th century.

The regiment constantly patrolled the coast of Granada to prevent the landing of North African pirates. It maintained detachments in Málaga, at the camp of Gibraltar, in Sevilla, in the port of Santa Maria, at the mines of Almaden, in Bailen, along the canal of Murcia and in Lucena.

During the war, the regiment continued to patrol the Coast of Granada. 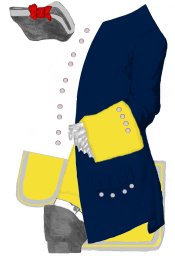 The standards were bordered in gold and silver.