Difference between revisions of "Cronegk Infantry"

The regiment had two battalions each with 6 musketeer companies and 1 grenadier company, two 3-pdrs guns and an authorised strength of 1,940 men.

The regiment took part in the following campaigns:

During the Seven Years' War the regiment was commanded by Colonel von Streithorst.

In 1757, the regiment was with the Reichsarmee operating in Thuringia and Saxony. In August, this army combined with a French contingent under the Prince de Soubise for the planned reconquest of Saxony. By August 5, the regiment counted 1,430 men fit for duty out of a book strength of 1,573 men. On November 5, the regiment took part in the Battle of Rossbach where it was brigaded with Kurtrier Infantry and Ferntheil Infantry under von Ferntheil.

On May 11 1759, during the Prussian incursion in Franconia, the regiment was part of Riedesel's rearguard during the retreat of the Austro-Imperial Army towards Kulmbach. In the afternoon, this rearguard was attacked by a Prussian detachment under the command of General Platen. The entire regiment was taken prisoner during this engagement. By mid-August 1759, during the Austro-Imperial campaign in Saxony, the 2 grenadier companies of the regiment were attached to Zweibrücken's Corps. On September 21, these companies probably took part in the Combat of Korbitz where they would have been deployed in Stolberg's Division. 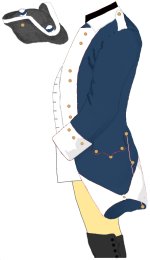 Troopers were armed with a brown musket and a sabre.

The colour of the drums was white with white-blue stripes.

As per Roider, the colours depicted hereafter had been issued at the outbreak of the Seven Years' War. However, for religious reasons, they were never handed out to the regiments. In Germany it was customary that the colours were nailed to the staff with additional religious symbols. As the regiment comprised Protestants as well as Catholics there was a grave dispute between them. So the regiment retained its old colours for which, besides the fact that their distinctive colour was green, we found no description.