The history of the Spanish naval infantry units and of the Armada (Navy) are closely related.

The Spanish “Marines” duty of security at sea and combat service on board and on land was called guarnicion (garrison), so as for arsenals, fortresses or vessels.

The so called “Puno Ofensivo de la Armada” (Offensive Fist of the Navy), as this “elite” branch of the Spanish armed force was commonly referred, was born officially on November 15 1536 from very ancient ancestors.

N.B.: St. John Nepomucene was the patron-saint of the naval infantry.

According to Clonard, up to 1637 only two infantry units served in the Navy. These Tercios (regiments) were commanded by D. Melchor de la Cueva (this regiment would later be called, “Vessels Regiment” from the Spanish term Baxeles) and by marquis de Lanzarote1.

In 1700, there were four Tercios de la Armada (Navy Regiments):

In Italy, three other Spanish infantry regiments were in existence and were often employed in naval warfare as “marines”.

In 1703, in the Galicia’s Army, loyal to Philip V, there were two naval regiments, commanded by:

In 1704, following the Ordonnance dated September 28, the ancient term Tercios was definitely abandoned and units, under the French influence, from now on, would be commonly referred to as regiments. Such a regiment was now commanded by a “Coronel” (colonel)2.

Personnel destined to be sent to America received a separated organization at company level.

In 1707 the regular regiments servicing at sea were:

These units operated in the “European” theatre of operation.

In America (“Las Indias”) units of company size were in service, like:

In 1718, part of these European units were reorganized in order to create an entirely new Corps: the “Cuerpo de Batallones” (Batallion Corps). The remaining part of the personnel was incorporated into line infantry. Names of the regiments changed as indicated in the following table3.

The newly organised Corps was regulated by a specific Ordennance concerning the various aspects of the service both at sea and on land4.

A fifth battalion was raised prior to 1717 to be embarked, exclusively, on galleys. It was named in Spanish “Mediterraneo” or “Mediterranean Regiment” but, soon, in 1728, the name was altered in “Galeras”. Unfortunately the date of the raising of this old unit was lost, so the unit’s was never officially recorded for precedence.

When created in1717, the Corps was commanded by a “Comandante General” (general commander) a Navy officer. The Comandante was assisted by an officer, acting as adjudant de camp captain, but curiously still ranked in an old fashion way as Sargento Mayor (see the table: Rank of the Spanish Armada at the end of this section).

Each battalion of the Corps mustered 600 men in 6 companies, each of 100 men, plus 10 sergeants, 16 corporals, a drummer, a fifer and 72 soldiers commanded by a captain and a lieutenant.

The regulation prescribed that the soldiers should be properly trained in using grenades in order to be able of service also on land and that they could be, when needed, detached from the parental company in six men squads to form “crack” companies of 36 men, plus a sergeant ad a drummer, ready to act at battalion level.

In 1721, the number of men per battalion was increased to 720. However, in 1748 when it was disbanded, the galley battalion numbered seven companies.

In 1729, the rank of First Sergeant was created.

In 1731, a “Barlovento” battalion, mustering 600 men, was raised to serve in the Caribbean theatre of operation, to contain Anglo-Dutch piracy.

In 1732, battalions were numbered, Galeras and Barlovento respectively receiving number 5 and 6.

In 1742, a seventh and an eight battalion were added.

In 1744, each unit was reinforced by the addition of a “piquet” of men coming from the line infantry.

In November 1748, Galeras and Barlovento battalions were both disbanded and their troops incorporated into line infantry.

In 1753, the Corps was reorganized once more on an 8 battalions basis (each battalion counting 6 companies):

N.B.: Due to the relative lack of marines, some line infantry regiments were called upon to provide detachments to man naval vessels.

By 1759, the Corps still counted 8 battalions. Together these eight battalions totalled some 5,712 men. The first four battalions were based in Cádiz, the 5th and 8th in Cartagena (Spain) and the 6th and 7th in Ferrol. Some companies were detached for service in the colonies while others were embarked on board naval vessels.

In 1766, grenadier companies were formed by detaching 11 picked men from each existing company.

In 1776, four more battalions were raised. The Corps reached a total of twelve numbered units. Each company mustered5:

Uniforms were similar to those prescribed for the army and followed the Ordenanzas de la Armada of 1748, further modified in 1752, 1760, 1761 and 1761. Taccoli, in his work published circa 1760, illustrates a very ornamented uniform (buttonholes of the chest, cuffs, pockets and in the small of the back laced with a wide yellow braid) which seems to belong to the Guardias Marinas rather than to the Batallones de Marina. Here we have followed the textual description proposed by Gomez Ruiz and Alonso Juanola in their book El Ejército de los Borbones. 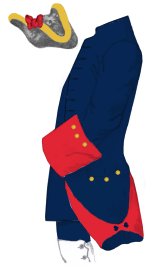 Officers carried spontoons. Their tricorne was laced in gold. Their waistcoat was red edged in gold.

Sergeants carried halberds. From March 24 1761, sergeants had a golden lace at their tricorne.

A colour plate from Jose Maria Bueno shows a drummer in 1748 with a red coat and blue cuffs. The coat is decorated with a red lace with a white chain, similar to the French pattern. The coat is not turned back, but turnbacks should be blue. The drum was blue with red rims and white cords. The barrel was painted with the small royal arms and crown, behind the arms were two crossed anchors in gold. Besides the crown and the arms, each had a white scroll.

The colour probably had two red ribbons with gold tassels, the staff was painted with red and yellow spirals and had a brass ferrule and a brass or gilt finial.

A Royal Ordonnance dated April 28 1717 describes the coronela (colonel flag) of the regiment with a purple field; a centre device consisting of the Royal Arms; and corner devices consisting of black anchors. No further description is given, but the coronela of the Barlovento battalion shows the detail: it had a purple field with a centre device consisting of the arms of Castile and Leon with a heart shield of the House of Bourbon, surmounted by the royal crown; the whole is surrounded by the Collar of the Order of the Golden Fleece and the blue ribbon of the Order of Espiritu Santo; corner devices consisted of black anchors pointing outwards.

The colours remained unchanged until 1808.

Dr. Marco Pagan for the initial version of this article.

Jean-Pierre Loriot for additional info on the uniform.

Volker Scholz for the information on the colours and on the uniform of musicians.