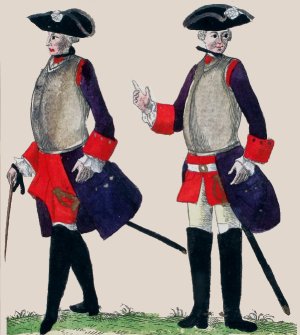 Cuirassiers du Roy after the reorganisation of 1761 - Source: Raspe 1762 from User:Zahn's collection

The regiment was originally raised on January 24 1638 and re-established on December 2 1665 as “Cuirassiers du Roy”. It was the sole French cavalry regiment to wear the full cuirass over the coat.

During the War of the Polish Succession, the regiment initially served in Italy in 1733 before returning to France in 1735. In 1736, it was at Cambrai.

The regiment counted 2 squadrons since 1745.

When the French Cavalry was reorganised on December 1 1761, the regiment was increased to 4 squadrons, each of them consisting of 4 companies of 40 troopers, for a total of 640 troopers. The 2 additional squadrons came from Ray Cavalerie) which was incorporated into the Cuirassiers du Roy. 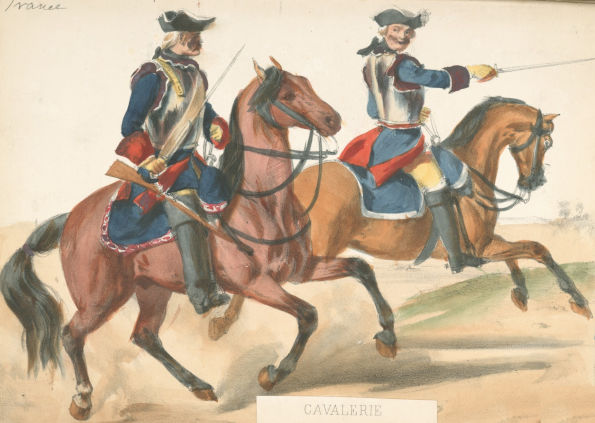 In 1756, the regiment was stationed at Haguenau.

In 1757, the regiment joined the Army of the Lower Rhine commanded by the Maréchal d'Estrées for the planned invasion of Hanover. From April 27 to June 17, it was part of the Reserve under the Prince de Soubise. On July 26, the regiment took part in the Battle of Hastenbeck where it was among the cavalry of the right wing. After the Convention of Klosterzeven, it followed the main body, led by the Maréchal de Richelieu, who encamped at Halberstadt, in Prussian territory, from September 28 to November 5. The regiment was placed on the first line of the right wing. At the end of the year, it took its winter-quarters in Soest in Westphalia, in the fourth line of the French army.

In April 1758, when the Comte de Clermont redeployed his army along the Rhine, the regiment was stationed at Xanten. After the successful crossing of the Rhine by Ferdinand of Brunswick's Army on May 31, the regiment retired towards Rheinberg where it joined Clermont's Army on June 2. It remained in this camp, where it was placed on the right wing of the first line, until June 12. On June 23, the regiment took part in the Battle of Krefeld where it was placed on the right wing of the first line, under d'Armentières. In Mid August, after Ferdinand's retreat to the east bank of the Rhine, the regiment, as part of the Army of the Lower Rhine under the Marquis de Contades, recrossed the Rhine to follow the Allied army. On August 20, it was encamped near Wesel where it was placed on the right wing of the first line. At the beginning of October, the regiment was attached to Chevert's Corps which was sent to reinforce Soubise's Army in Hesse. By October 8, the effective strength of the regiment amounted to only 210 horse, out of a theoretical strength of 320 horse. On October 10, it was at the Battle of Lutterberg where it formed part of Chevert's Corps which won the day by turning the Allied left flank. During this battle, the Cuirassiers du Roy, under the command of the Marquis de Lostanges and of the Marquis of Voyer guided by the maréchal des logis Caulincourt, saw heavy fighting. The first squadron (companies of M. d'Artaguiette, M. de France, M. de Courtemer and M. de Laur) charged the Allied infantry column and suffered casualties from bayonets. Lostanges had a leg pierced and later received a sabre cut to the head; Courtemer, Laur, Panniseau (adjutant-major) and Lieutenant de Fontaine were killed; the standard-bearer de Fillot died later (October 18) of his wounds. All the officers and NCOs were wounded under their killed horses. The second squadron, (companies: M. de Champoléon, M. de Saint-Didier, M. de Voughy and of M. de Tauriac) under Lieutenant-Colonel d’Artaguiette, fought against the Allied cavalry. Almost all the officers were wounded by sabre-cuts, like Major de Pétremand-Valey. The Chevalier of Lostanges, cornette of the Saint-Didier company, was killed. The total losses were 20 killed and 29 wounded for the first squadron; and 13 killed and 31 wounded for the second squadron. The regiment also had 109 horses killed and 35 wounded. Chevert said "Les cuirassiers du Roy ont le plus souffert", reporting about the regiment. The captains de France and de Saint-Didier were commended with the Saint-Louis Cross. Total losses forced the regiment to a halt and the unit was sent back to France for rest and refit.

At the beginning of 1759, the regiment was stationed at Pont-Audemer, in Normandy.

On July 16, 1761, the regiment fought at the Battle of Vellinghausen. 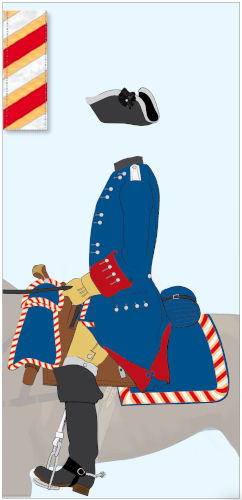 Troopers were armed with a carbine, two pistols and a sabre. They were the sole French cavalrymen to wear the full cuirass (front and back plates) over the coat, fixed with buff and brass belts and buckles.

The regiment was considered as an elite unit and its troopers sported moustaches.

Dr. Marco Pagan for additional information provided on the role of the regiment during the Battle of Lutterberg.