This gentleman's regiment was raised at the end of 1667 for the Province of Lorraine by the Marquis de Valavoire.

The regiment took part in the War of the Polish Succession.

In 1756, the regiment ranked 34th and counted two squadrons.

When the French cavalry was reorganised on December 1 1761, the regiment was incorporated into Royal-Étranger Cavalerie. Effective incorporation took place at Lille on March 26 1763 when the regiments returned to France.

In the Spring of 1757, the regiment took part in the invasion of Hanover. On July 26, at the Battle of Hastenbeck, it was among the cavalry of the left wing. After the victory, it encamped at Grosselsen near Hameln with the main body of the Army of the Lower Rhine from July 31 to August 2. On September 8, after the Convention of Kloster-Zeven, it followed the main body, led by the Maréchal Duc de Richelieu, who encamped at Halberstadt in Prussian territory from September 28 to November 5. The regiment was placed on the left wing of the second line. At the end of the year, it took its winter-quarters in the second line of the French army at Einbeck and Alfeld.

In April 1758, when the Comte de Clermont redeployed his army along the Rhine, the regiment was stationed between Neuss and Krefeld. After the successful crossing of the Rhine by an Allied army under Ferdinand of Brunswick on May 31, the regiment retired towards Rheinberg where it joined Clermont's Army on June 2. It remained in this camp until June 12 and was placed on the right wing of the second line. On June 23, the regiment took part in the Battle of Krefeld where it was placed on the left wing of the second line, under de Muy. In Mid August, after Ferdinand's retreat to the east bank of the Rhine, the regiment, as part of the Army of the Lower Rhine, now under the Marquis de Contades, recrossed the Rhine to follow the Allies. On August 20, it was encamped near Wesel where it was placed on the left wing of the second line. At the end of September, the regiment was part of Fitzjames' Corps sent as reinforcements to the Prince de Soubise in Hesse. On October 10, it was present at the Battle of Lutterberg where it was part of the Reserve of cavalry.

By the end of January 1760, the regiment had taken its winter-quarters in the fourth line of the French army between the Rhine and the Main on the left bank of the Rhine. By mid March, the regiment was billeted in Trebur, still in the fourth line. By May 23, it was part of the first line of the cavalry left wing of Broglie's Army. On July 10, the regiment might have been attached to Prince Camille's Cavalry Corps who arrived too late to take part in the Combat of Corbach. 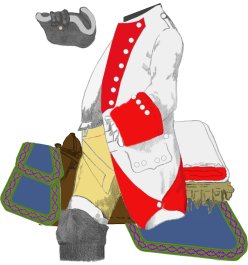 Lienhart and Humbert, a secondary source, show the following differences for the uniform of 1757 (they most probably depict the uniform worn during the War of the Austrian Succession):

In 1757, when the duc de Charost acquired the regiment, kettle drummers and trumpeters wore the livery of the House of Charost: yellow lined blue ornamented with a braid consisting of red, yellow and blue waved lines. 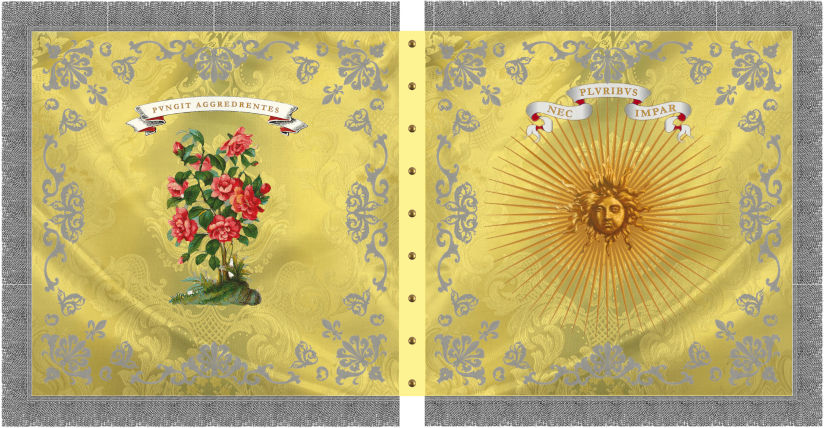