The exact date when this regiment was raised is unknown. It is possible that the Duke of Celle raised it during the Thirty Years’ War.

In 1673, during the Franco-Dutch War (1672-78), the regiment campaigned against the French on the Weser. In 1674 and 1675, it campaigned on the Rhine and contributed to the capture of Saarbrück and Trier, and to the occupation of the country of Bremen and Verden. In 1676, it served on the Rhine.

In 1719, the regiment took part in the campaign in Mecklenburg and in the action of Wallsmühlen,

In 1757, the regiment joined the Observation Army assembling at Bielefeld. On July 26, the regiment took part in the Battle of Hastenbeck where it was detached from the main army and posted near Afferde along with Schlütter Horse. During the battle, the squadrons took position in a defile between Afferde and Diedersen to cover the extreme left rear of the Hanoverian position. Ordered to counter-attack the French in Obensburg, the brigade was wildly successful as the French, in their confusion, fired on their Swiss allies thinking they were advancing Hanoverians. However, the recapture of Obensburg was short-lived as the French cavalry soon arrived and the Hanoverian cavalry withdrew covering the retreat of the rest of Cumberland's force. The Allies then retreated to Bremervörde and Stade where it capitulated.

In 1758, during the Allied winter offensive in western Germany, the regiment took part in the siege and capture of Minden. On May 26, it was with Ferdinand's main force in the camp of Nottuln. On May 31, it accompanied Ferdinand in his offensive on the west bank of the Rhine. On June 23, the regiment took part in the Battle of Krefeld where it was deployed in the centre as part of the brigade under Lieutenant-General von Oberg whose division was ordered to make diversion towards Sankt-Tönis.

In June 1759, the regiment was part of the Allied main army under the command of Duke Ferdinand of Brunswick. On August 1, it was present at the Battle of Minden where it was deployed in the second line of the cavalry right wing commanded by Lord Sackville whose deliberate inactivity kept the unit out of any serious action. The regiment then accompanied the Allied army in its advance on Paderborn, Stadtberg and Marburg. In September, the regiment was at the camp of Crofdorf. In December, the regiment joined the corps of the Hereditary Prince of Brunswick at Eschwege and marched to Freyberg in Saxony to reinforce the Prussian army.

In the spring of 1760, the regiment returned to Western Germany, On July 31, it took part in the Battle of Warburg where it was deployed between Ossendorf and Menne in the third line of the cavalry centre. On August 22, the regiment was part of the corps of the Hereditary Prince who crossed the Diemel and advanced on Broglie's left flank, his vanguard reaching Zierenberg. His light troops engaged a French detachment (Royal Dragons, Thianges Dragons and part of the Chasseurs de Fischer) under M. de Travers, which had been left at Oberelsungen to observe the Allies' movements. The Allied light troops were soon supported by the Hereditary Prince at the head of the 2nd North British Dragoons (Scot Greys) and the 6th Inniskilling Dragoons and the British grenadiers. The French were finally driven back with considerable loss and took refuge into Zierenberg.

On February 15, 1761, the regiment took part in the Combat of Langensalza. From 7:30 AM, Major von Falkenberg at the head of one squadron of the regiment delayed the Saxon infantry regiment Prinz Anton for more than two hours till the arrival of Lieutenant-general Reden followed by his regiment (Reden Dragoons). On February 19, Luckner's Corps, reinforced with 4 sqns (this regiment along with Veltheim Cavalry), attacked the barricaded bridge at Vacha, drove back the defenders and made itself master of the town, forcing Stainville to retire from this town. On July 16, the regiment was at the Battle of Vellinghausen where it was deployed in the second line of the right wing under the command of the Hereditary Prince. It unit was effectively kept out of combat. 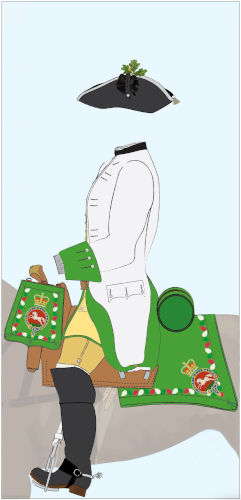 Officers wore a yellow silken sash around the waist; a silver gorget, a silver porte-epee; silver lace on the tricorne; gold lace around the collar and cuffs. They did not carry any cross-belt.

NCO had silver laces on the cuffs, pockets, and waistcoat. They did not carry any cross-belt.

Musicians comprised trumpeters and one kettle-drummer. They were dressed in reverse colours and probably swallow nests at the shoulders. Staff trumpeter probably carried NCO distinctives.

The kettle-drum apron and trumpet banners were green fringed in gold and carried the Springing White Horse surmounted by an Electoral crown; the motto “NEC ASPERA TERRENT” underneath.

This standard kept at the Hannover Historisches Museum (inventory number VM 16997) measures 51 cm high and 64 cm wide. Its flagpole has a length of 268 cm. 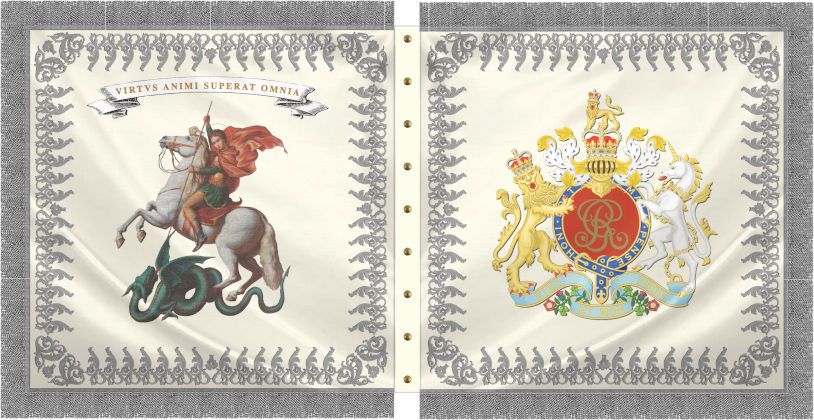 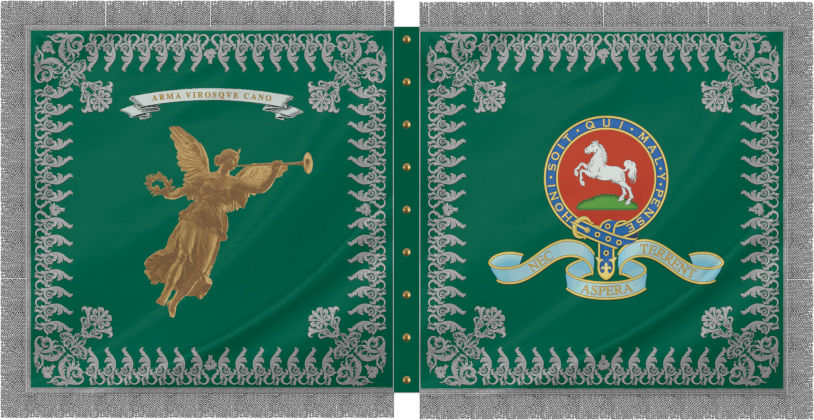