The regiment was created by Louis XIV for his son the Dauphin de France on June 15, 1667. Initially the regiment ranked 45th.

During the War of Devolution (1667–68), the regiment served with the Army of Flanders and assumed garrison duty in Charleroi after the capture of this city. In 1668, the regiment campaigned in Franche-Comté and distinguished itself at the sieges of Besançon and Dôle. It was then charged to demolish the fortifications of Dôle which it evacuated on June 10 to go to Tournai.

In 1669 at Tournai, the remnants of the regiment of the Marquis de Linières was incorporated into Dauphin Infanterie who also inherited its rank (16th), just after Lyonnais Infanterie.

In 1670, the regiment campaigned in Lorraine under M. de Créqui, taking part in the sieges of Epinal, Chasté and Longwy. In 1671, it was increased to 70 companies; till then Louis XIV wanted that his son, even though he was still a child, had only a lieutenant-colonel. He changed his mind and created a charge of colonel-lieutenant for the regiment.

After the peace, the regiment was sent to Huy. On its return to France, a battalion was sent to Hesdin, the other to Montreuil. The Chantereine battalion, which had always been detached on the Rhine, remained in Freiburg.

In 1680, the regiment was in Lille where it was reviewed with, for the first time, with the Dauphin de France at its head. In 1681, the regiment was transferred from Valenciennes to Freiburg to work at the fortifications. In 1682, it worked at the fortifications of Longwy. In 1683, it was at the camp of Molsheim. In 1684, it formed part of the army who covered the siege of Luxembourg. In May 1685, it was called to Versailles for the instruction of the Dauphin and then went to Boulonnais.

After the Treaty of Ryswick, the regiment assumed garrison duty in Valenciennes. In 1698, it was at the camp of Compiègne. On 30 December, it incorporated Bellisle Infanterie, raised in 1695. In 1699, the regiment was at Tournai; in 1700, at Givet.

In 1701, at the outbreak of the War of the Spanish Succession (1701-13), the regiment occupied Malines. In 1702, it took part in the Combat of Nijmegen. In 1703, it was transferred to Alsace and participated in the siege of Kehl, in the attack of the Lines of Stolhoffen, in the occupation of the Kinzig Valley, in the storming of the entrenchments of the Hornberg, in the Combat of Munderkirchen, in the Battle of Höchstädt, and in the sieges of Ulm and Augsburg. In 1704, it took part in the disastrous Battle of Blenheim; in 1705, in the passage of the Lines of Wissembourg and in the siege of Nice. In 1706, the regiment formed part of the Army of Piedmont and took part in the siege and battle of Turin where two of its battalions were encircled and forced to surrender as prisoners of war. In 1708, the remaining battalion campaigned in Flanders where it was at the Battle of Oudenarde. From 1709 to 1712, the regiment remained in the Lines of Wissembourg. In 1712, the reorganised 3 battalions formed part of the Army of Flanders. Two battalions thrown into Le Quesnoy where invested in June by General Fagel and taken prisoners. Directed to Holland, most men managed to escape on the way. By the end of the campaign, the regiment, almost at full strength, was on the Rhine. In 1713, it took part in the sieges of Landau and Freiburg.

Until 1733, the regiment assumed garrison duty.

In 1733, at the outbreak of the War of the Polish Succession (1733-35), the regiment was sent to Italy where it was at the siege if Pizzighetone and Gera d’Adda. In 1734, it took part in the sieges of Novarra and Tortona, in the affairs of the Castle of Colorno, in the Battle of San Pietro, in the capture of Modena, in an engagement near Gardella and in the Battle of Guastalla; and in 1735, in the capture of Gonzague, Reggiolo and Revere.

In 1736, the regiment returned to France where it was stationed at Valence and Montélimart, and later in Languedoc.

In 1749, the third and fourth battalion were disbanded. The two remaining battalions went to Dunkerque. From 1750 to 1755, it garrisoned Mézières, Charleville and Sédan.

On the eve of the Seven Years' War, the regiment counted two battalions and had prévôté (provostship). When the French army was reorganised in December 1762, the regiment was increased to 4 battalions by incorporating Guyenne Infanterie.

During the Seven Years' War, the regiment ranked 16th. The Colonel of the regiment was the Dauphin. However, the effective commander was the colonel-lieutenant:

In March 1757, the regiment left Toul to join the Army of the Lower Rhine commanded by the Maréchal d'Estrées at Wesel for the planned invasion of Hanover. At the end of June, the regiment was encamped at Bielefeld with d'Estrées's main corps. On August 26, the regiment and the La Marine Brigade advanced against Rethem forcing the Hanoverian troops to abandon the place. After the Convention of Kloster-Zeven, the regiment followed the main body, led by the Maréchal de Richelieu, who encamped at Halberstadt, in Prussian territory, from September 28 to November 5. The regiment was placed in the centre of the second line. On December 25, it was at the passage of the Aller. At the end of the year, it took its winter-quarters in the second line of the French army at Münden.

In February 1758, when Ferdinand of Brunswick launched his winter offensive in Western Germany, the regiment retired on the Rhine with the rest of the French army and took post at Hanau. In April, when Clermont redeployed his army along the Rhine, the regiment was placed in the third line at Roermond. After the successful crossing of the Rhine by Ferdinand's army on May 31, the regiment retired towards Rheinberg where it joined Clermont's Army on June 2. It then remained in this camp until June 12 and was placed in the centre of the second line. By July, the regiment had been transferred to Soubise's Army assembling near Friedberg in Hesse. It was used to protect the lines of communication with the Rhine. At the end of the year, it took its winter-quarters at Friedberg.

In the spring of 1759, the regiment took part in the siege of Münster. On April 13, the regiment was at the Battle of Bergen where it formed part of reserve of the left wing deployed in regimental columns behind the Warthberg. In this battle, it lost 200 men, including Captains de Chaponnay, de Gray, Montullé, Connezac and 3 lieutenants killed. In June, at the beginning of the French offensive in Western Germany, the regiment was part of the “Right Reserve” under the command of the Duc de Broglie who had taken position at Friedberg in Hesse. On August 1, the regiment took part in the Battle of Minden where it was deployed in the first line of Broglie's corps. It lost 150 men, including Captain de Panis and Lieutenant de Longeville wounded.

In the spring of 1761, the regiment took post at Hersfeld. On July 16, it took part in the Battle of Vellinghausen. It distinguished itself in this battle when, along with Du Roi Infanterie , it came to the rescue of the Deux-Ponts Brigade who had made itself master of the village de Vellinghausen, but had been driven back. They fought stubbornly during the entire day and ceded only when they were alone on the battle field. In this battle, the regiment lost almost all his grenadiers and chasseurs. Captain La Clos was killed in action. In October, the regiment returned to France to replenish its ranks and garrisoned Dunkerque.

In 1762, the regiment was sent back to Germany where it was attached to the Reserve under the Prince de Condé. It was at the combat of Ham. Its grenadiers and chasseurs took part in an expedition against Osnabrück.

At the end of the war, the regiment returned to Dunkerque in France. 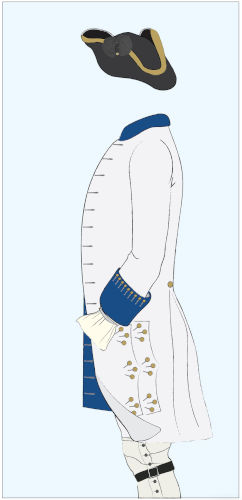 Exceptionally, sergeants of the grenadier companies of this regiment carried a fork rather than a halberd. Louis XIV had authorized this distinction to commemorate the storming of a defensive work by the grenadiers of Dauphin Infanterie on April 2 1691, during the siege of Mons. Indeed, the Austrians defending this work were armed with forks and scythes.

N.B.: it seems that in an earlier period (end of the XVIIth century) drummers of the regiment wore the Dauphin's livery: blue laced aurore (light orange) but during the XVIIIth century they adopted the Royal livery.

Ordonnance colours: the Etat Général des Troupes Françoises of 1753 describes them with a white cross wearing the arms of the Dauphin in its centre with his motto: "Res praestant, non verba fidem". Each quarter of the ordonnance flags was ondé (horizontal waved stripes) in red, blue and yellow and bordered in white and yellow. Contemporary illustrations give three different interpretations of the disposition of these stripes in each quarter: