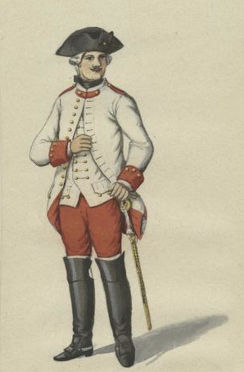 The regiment was raised in Bohemia in 1682 by GFWM Hermann Otto, Count Limburg-Styrum who got the relevant decree on 8. March 8 1682. Two companies were transferred from Montecuccoli Cuirassiers and Pálffy Cuirassiers to form the kernel of the new regiment.

In 1701, at the outbreak of the War of the Spanish Succession, the regiment was attached to the army of Prince Eugène who proceeded to the invasion of Northern Italy. In 1701, the regiment took part in the Combat of Carpi and in the Battle of Chiari; in 1702, in the combat of Santa Vittoria and in the Battle of Luzzara; in 1703, in an engagement near Ostiglia. A detachment then participated in the raid in Piedmont. In 1704, three squadrons were sent to Piedmont while the other three squadrons remained encamped on the Po River. In 1705, three squadrons remained stationed in Piedmont while the three other squadrons took part in the Battle of Cassano. From 1707 to 1712, the regiment remained stationed in Northern Italy where it saw no action. In 1713, it was transferred to the Rhine but saw no action.

In 1716, the regiment rejoined the main army in Hungary and took part in the Battle of Peterwardein and in the siege of Temesvár. In 1717, it was at the siege and battle of Belgrade. In 1718 and 1719, the regiment was in garrison in Moravia. It was then transferred to Transylvania and Hungary for a few years.

In 1734, during the War of the Polish Succession, the regiment campaigned in Italy and took part in the Battle of Guastalla. In 1735, during the Battle of Marengo, its colonel, Saint-Pierre Chevalier de Montfalcon, distinguished himself.

In 1743, during the War of the Austrian Succession, the regiment fought at Camposanto. In 1744, it participated in the raid on Naples. In 1744, it took part in the surprise attack on Velletri. In 1746, it fought in the battles of Piacenza and Rottofredo, and later on in the raid in Provence.

After the Seven Years' War, the regiment garrisoned Csakova (Banat).

The regiment was disbanded in 1768 and its squadrons incorporated into other regiments. Its carabiniers were transferred to the newly established 2. Carabinier Regiment “Althann”

In June 1756, at the beginning of war, the regiment was stationed in the County of Arad in Hungary and counted 749 men and 779 horses.

By August 2 1758, the regiment served in the first line of the main Austrian army under the command of Field Marshal Daun near Jaromirs. Daun was following up the Prussian army retiring through Bohemia after the failure of the invasion of Moravia. On October 14, the regiment took part in the Battle of Hochkirch where it was deployed in Loudon's Corps, to the south-west of Hochkirch. The Major Prince Nassau-Usingen would later receive the Maria-Theresia-Order for his conduct in this battle.

By mid August 1759, the regiment was part of Buccow's Corps posted in Lusatia. On September 2, it took part in the Combat of Sorau.

In 1760, the regiment was allocated to the “Reichsarmee”.

On May 12 1762, the regiment was engaged in the Combat of Döbeln where its six squadrons were taken, along with the entire corps of FZM Zedtwitz, as prisoner of war. In this action, the regiment also lost its kettle-drums. 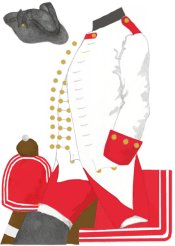 The Albertina Handschrift shows 13 buttons on the coat. Raspe along with several other sources shows only 12 buttons.

The Bautzener Bilderhandschrift shows a laced tricorne, a red neckstock

Leib Standard: no information available yet