This article is a general presentation of the deployment of the Troupes de la Marine in America and in the West Indies in the middle of the XVIIIth century. Additional details are also available in the section “Service during the War” of the following articles:

On the eve of the Seven Years' War (1756-1763), France had a huge colonial empire in America and in the West Indies. These vast expanses depended directly from the authority of the Ministry of the Navy (created in 1669). To defend these countries, the ministry sent infantrymen (Compagnies Franches de la Marine) and artillerymen (Canonniers-Bombardiers de la Marine) in successive waves, increasing or decreasing their effective strength along the years according to needs. These men were usually stationed in the main towns of the colonies, however a good number among them were sent to remote forts (in North America) or to distant islands(in the West Indies).

This article presents the forces deployed in the French colonies of America and the various locations were they served. 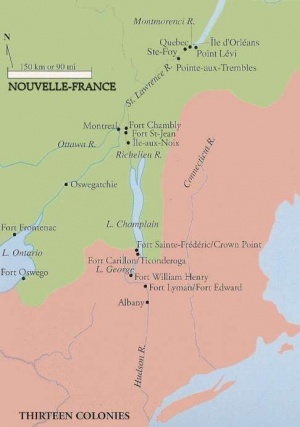 Canada and the Thirteen Colonies in 1754
Source: User Donnacona of Wikimedia Commons

The three first Compagnies Franches de la Marine arrived in Québec in 1683. They were up to 28 in 1699. Their number did not considerably increase during the first half of the XVIIIth century but the effective strength of the various companies fluctuated. In April 1750, there were 30 Compagnies Franches de la Marine in Nouvelle-France, each counting 60 soldiers. In March 1756, during the “French and Indian War”, the number of soldiers was increased to 65 men.

Most of these companies served in Montréal but they were also present in the two other large towns of the colony: Trois-Rivières and Québec. These companies also garrisoned the forts defending the colony. In the latter case, and according to the size of the fort, soldiers were sent in small or large detachments. In the most distant posts, there were only a handful of men; however the precise effective strength of each detachment is difficult to assess.

On the eve of the Seven Years' War, Nouvelle-France could count on a theoretical strength of a little more than 1,800 officers and soldiers.

Finally, the colony could also depend on a company of Canonniers-Bombardiers de la Marine created on April 10 It counted 50 men and two officers. As for infantrymen, they could be sent in small detachment into the various forts of the colony.

1.b) The Fortress of Louisbourg 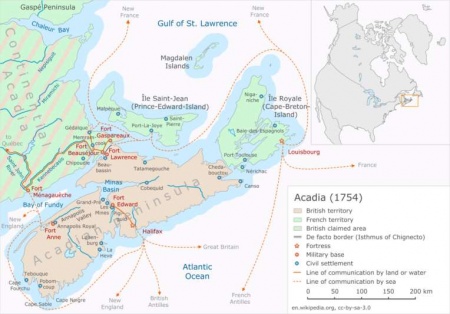 The first Compagnies Franches de la Marine arrived on Isle Royale (present-day Cape Breton Island) as soon as 1714. They came from the old garrisons of Acadia which had just been ceded to Great Britain on the previous year. There were seven companies in 1715 but they were soon reduced to six and then increased to eight in 1730. After the War of the Austrian Succession (1740-1748) (known in North America as “King George's War” 1744-1748) which had saw the capture of the Fortress of Louisbourg by Anglo-American colonists, the Treaty of Aix-la-Chapelle (1748) retro-ceded the fortress to France. Versailles then decided to reinforce the Compagnies Franches de la Marine posted in Louisbourg. Thus, in March 1749 and till the outbreak of the new conflict, there were 24 companies at Louisbourg, each of them counting two officers and 50 soldiers (including two “cadets à l’aiguillette”), for a total of a little more than 1,200 men.

Most of these companies served within the fortress but some of them had been detached in other French establishments on Isle Royale: two companies at Port Toulouse and one at Port Dauphin. Finally, one company was posted at Port la Joye on Isle Saint Jean (present-day Prince Edward Island).

Along with these infantrymen, a company of Canonniers-Bombardiers de la Marine (2 officers, 50 men) served at Louisbourg since April 10 1743. A second company was organised on February 1st 1758 on the eve of the second siege of Louisbourg. Both companies served in Louisbourg. 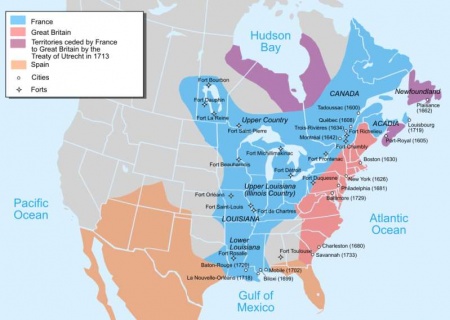 Nouvelle France in 1750. The map show the extent of Louisiane which covered part of several American States
Source: User Pinpin of Wikimedia Commons

The two first Compagnies Franches de la Marine arrived in 1703. In 1714, there were a total of four companies in Louisiane (a territory much larger than present-day Louisiana); then eight companies (each of 3 officers and 50 soldiers) in 1716. In 1732, the number of companies had reached 13 (each of 4 officers and 50 soldiers). In 1738, one cadet à l’aiguillette was added to each company. In September 1750, Louisiane was defended by 37 companies; then 36 in 1754 for a total theoretical strength of more than 1,800 officers and soldiers. By November 1759, the number of companies stationed in Louisiane was down to 35.

These companies served mainly in Nouvelle Orléans, Mobile, Biloxi and in the main forts of the colony. Small detachments were deployed along the Mississippi and Missouri as well as in northern Alabama and northern Illinois.

On November 1st 1759, during the Seven Years' War, a company (2 officers and 50 men) of Canonniers-Bombardiers de la Marine was organised. 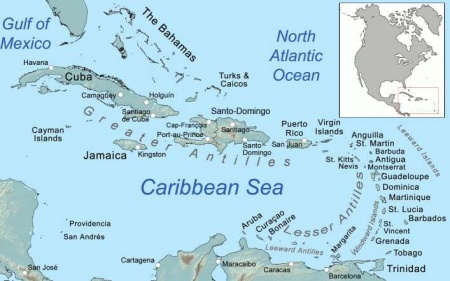 West Indies circa 1750.
Source: Adapted by CyberMonk from an original work by user Kmusser of Wikimedia Commons

As early as 1714, there were 12 Compagnies Franches de la Marine (each of 2 officers and 50 soldiers) on the Island of Saint Domingue. After the arrival of a detachment of Karrer Infanterie, the number of Compagnies Franches de la Marine was reduced to eight but it was soon raised again to twelve companies in August 1721 and increased to 16 in July 1732. By October 1750, there were 34 companies (each of 3 officers and 50 men) at Saint Domingue for a total of more than 1,800 men. These companies served in the main towns of the island: Le Cap, Port au Prince, Saint Louis and Petit Goâve.

On December 19 1745, a company (2 officers and 50 soldiers) of Canonniers-Bombardiers de la Marine was organised.

2.b) Martinique and its dependencies

In 1674, the first Compagnies Franches de la Marine arrived in Martinique. In 1714, there were 14 companies (each of 3 officers and 50 soldiers) distributed into the Windward Islands.

As in Saint Domingue, with the arrival of companies of Karrer Infanterie, the number of Compagnies Franches de la Marine was reduced to 10 companies. By October 1750, these companies had been increased to 20 companies (each of 3 officers and 50 soldiers) for a total of more than 1,000 officers and soldiers.

These companies served mainly in Martinique (considered as the cornerstone of the French plan in the West Indies) but also in Guadeloupe, Grenade and Sainte Lucie.

On April 30 1747, a first company of Canonniers-Bombardiers de la Marine was organised in Martinique. A second company was created on November 20 1757. As for the Compagnies Franches de la Marine, these canonniers were mainly based in Martinique but had small detachments in various dependencies.

In conclusion, we saw that on the eve of the Seven Years War, France could count, in North America and in the West Indies, on some 8,100 officers and soldiers of the Compagnies Franches de la Marine and about 360 Canonniers-Bombardiers de la Marine, for a total of almost 8,400 professional soldiers. This was a rather small force if we consider the vastness of its theatres of operation. However, in Nouvelle France, thanks to the alliance concluded with Indian tribes and to a very experimented militia, combined to a terrain perfectly suited to Petite Guerre, the lack of soldiers was a problem manageable by local authorities, at least during the first years of the conflict.

The Troupes de Marine, despite their number and dispersion, were on the offensive as early as 1754. The strategic choice of France for a war based on ambushes and rapid raids required few soldiers; for example, only a hundred men of the Compagnies Franches de la Marine (supervising militia and Indians) were present at the ambush on the Monongahela in 1755. It was only from 1756, with the arrival of the Marquis de Montcalm that the concept of guerilla warfare (so dear to Nouvelle France) saw major changes due to the influence of typically European methods: particularly with formal sieges of forts.. Nevertheless, soldiers of the metropolitan line infantry battalions learned to take in the Petite Guerre, fighting as their counterparts of the Marine!

Progressively during the conflict, in front of the growing military power deployed by Great Britain and confronted to the lack of means, French tactic based on guerilla warfare experienced a deep mutation. Indeed, raids became more occasional and in the last years of the conflict, the soldiers of the Compagnies Franches de la Marine increasingly fought European style: as early as July 1757, a first battalion known as de la Marine was organised to be incorporated into Montcalm's force of regular battalions. A second battalion was also organised in 1760. These two units took part in the two major battles (Québec and Sainte-Foy) who decided of the fate of Nouvelle France!

In the West Indies, the Troupes de la Marine were gathered around two strong points: Saint Domingue and Martinique. From the latter island, garrison were sent to defend the various dependencies (Guadeloupe, Sainte-Lucie…). The soldiers experienced quite peaceful years till 1759 when large British amphibious forces began to conquer French possessions one after the other (to the exception of Saint Domingue) during the next three years: capture of Guadeloupe in 1759; capture of Martinique in 1762. Despite their small number, the Troupes de la Marine fought courageously, using guerilla on several occasions in front of a more than determined opponent!

Jean-Charles Soulié for the initial version of this article