The regiment was created in 1692 for Brigadier La Motte with three companies contributed by the Celler Boisdavid Infantry and three companies by La Motte Infantry. The new regiment was immediately sent to Hungary to fight the Turks and took part in the siege of Grosswardein. In 1693, it was at the siege of Belgrade. In 1694, it participated in the defence of Peterwardein. At the end of the same year, when it returned home, it ceded two companies back to their original regiments but its total strength was maintained at six companies. Furthermore, Brigadier La Motte returned to his former regiment, being replaced by Lieutenant-Colonel Tozin at the head of the present regiment. In 1695, two new companies were added to the regiment but were disbanded in 1697.

In 1696, during the Nine Years' War (1688–97), the regiment was among the reinforcements sent to the Netherlands by the Duchy of Lüneburg.

In 1719, the regiment was part of the force sent against the Russians and Mecklenburgers and fought in the action of Wallsmühlen. After the capture of Schwerin, it formed part of the garrison of the place.

In 1733, the regiment was once more sent to Mecklenburg to quench troubles and to lift the blockade of the Castle of Güstow.

In 1738, the regiment marched against the Danes to Steinhorst.

In April 1756, the regiment was part of the Allied reinforcements sent to Great Britain.

In March 1757, the regiment was sent back to the continent. On July 26, during the French invasion of Hanover, the regiment took part in the Battle of Hastenbeck where it was deployed in the first line of the right wing under the command of General Block.

On May 26 1758, the regiment was with Ferdinand's main force in the camp of Nottuln. On May 31, it accompanied Ferdinand in his offensive on the west bank of the Rhine. On June 17, when Spörcken set off from his camp at Rheinberg, he left the regiment at Orsoy. On October 10, the regiment fought in the Battle of Lutterberg where it was deployed the first line of the centre. In this battle, the regiment lost Captain-Lieutenant von Platen, killed; Lieutenant-Colonel Cwachtmann, Major von Schenk and Captain von Korf, wounded.

In June 1759, the regiment was part of the main Allied army under the command of Duke Ferdinand of Brunswick. On July 27 in the afternoon, the Hereditary Prince set off from Petershagen, near Minden, with 6 bns, including this regiment, and 8 dragoon sqns, a corps totalling some 6,000 men, and marched south-westward to Lübbecke to threaten the French left flank and the supply line between Minden and Paderborn. On August 1, the regiment was part of the right wing of the corps of the Hereditary Prince who attacked and defeated Brissac's French corps in the engagement of Gohfeld. In October, the regiment distinguished itself at the siege of Münster, repulsing a sortie. After the capture of Münster, the regiment took up its winter-quarters in the place.

On July 10 1760, the regiment was present at the Combat of Corbach where it was attached to the Reserve under the Prince von Anhalt. This reserve did not take part to the combat. On September 19, the regiment fought in the engagement of Löwenhagen.

On February 15 1761, the regiment fought in the Combat of Langensalza. On March 21, it took part in the engagement of Grünberg where it was taken prisoners while acting as rearguard during the retreat. By June, it had been exchanged and allocated to Spörcken's Corps posted on the Diemel near Warburg. On June 29, Broglie tried to isolate this corps from the main Allied army. During the retreat, the regiment covered Spörcken's baggage and artillery. The French attacked this rearguard near Brakel and the regiment lost a few officers. On July 16, it was attached to Spörcken's Corps, remaining at Herzfeld on the left bank of the Lippe during the Battle of Vellinghausen. In August, the regiment was attached to Luckner's Corps who attacked French outposts at Dassel, Uslar and Hörter, taking 500 dragoons and many foot prisoners and capturing 2 guns, 3 colours and more than 800 horses and mules. On October 13, the regiment contributed to the relief of Braunschweig.

By May 23 1762, the regiment served in the main Allied army, in Lieutenant-General Count Kielmansegg's Division. On June 24, the regiment took part in the Battle of Wilhelmsthal. 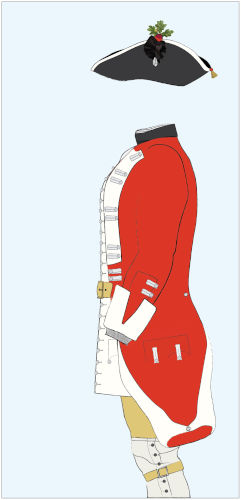 Colonel Colour: Exceptionally this regiment had its own colonel colour which had a white field; centre device consisting of a Lion couchant surmounted by a yellow scroll carrying the motto UT ALI DORMIANT. 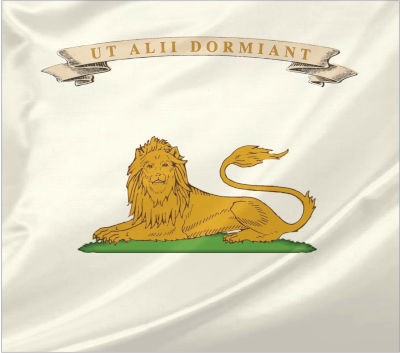 Regimental Colour: red field; centre device consisting of a Lion couchant surmounted by a yellow scroll carrying the motto UT ALI DORMIANT. Hereafter, we present an illustration from the Reitzenstein Sammlung, dating from circa 1761 (left) and the interpretation of Hannoverdidi (right).