The regiment was raised in 1704, during the War of the Spanish Succession (1701-13), as a unit of the Principality of Brunswick-Celle which remained independent from Hanover until 1705.Its first Chef was Colonel Starcke from 1704 to 1706.

In 1704, immediately after its creation, the regiment was sent to the Netherlands. In 1711, it took part in the siege of Bouchain; in 1712, in the capture of Le Quesnoy and in the Battle of Denain. After the defeat, it retired to Marchiennes where it resisted for fourteen days before surrendering as prisoners of war. In 1713, the regiment was re-established in Einbeck.

In 1714, when plague broke out in Hamburg, the regiment was sent from Minden to take post along the Luhe down to Buxtehude.

In 1715, when the Electorate of Braunscheig-Lüneburg (aka Hanover) provided a contingent of 5,000 men to Denmark to campaign in Pomerania, the regiment took part in the blockade of Wismar. In 1716, it was the first Hanoverian battalion to enter in Wismar.

In 1717, the regiment garrisoned Ratzeburg and Lauenburg.

In 1719, the regiment campaigned in Mecklenburg where it took part in the engagement of Wallsmühlen against the Mecklenburgers and the Russians, pursuing the Mecklenburgers up to Malchin. It then occupied Schwerin. In 1720, it returned to Ratzeburg and Mölln.

In 1734, during the War of the Polish Succession (1733-35), the regiment the regiment was sent to Philipsburg on the Rhine where it crossed the Main and the Hundsrück and advanced to Trarbach. In 1735, it took part in the Battle of Clausen. It then returned to Hanover and took up quarters in Dannenberg.

In December 1738, 400 men of the regiment were sent to Steinhorst. They later came back to Mölln before being sent to Boitzenburg.

In 1743, during the War of the Austrian Succession (1740-48), the regiment was sent to the Main and fought in the Battle of Dettingen. It then served until 1745 on the Rhine. In 1745, the regiment was sent back to Hanover and Göttingen. In 1747, it marched to the Netherlands where it fought in the Battle of Lauffeld where it lost 280 men killed or wounded.

From 1748 to 1757, the regiment garrisoned Stolzenau and Diepholz

During the Seven Years' War the regimental inhabers were:

On July 26 1757, during the French invasion of Hanover, the regiment took part in the Battle of Hastenbeck where it was deployed in the first line of the right wing under the command of Lieutenant-General Zastrow.

In March 1758, during the Allied winter offensive in Western Germany, the regiment took part in the siege and capture of Minden. On May 26, it was with the corps of the Prince von Anhalt in the camp of Coesfeld. On May 31, this corps accompanied Ferdinand of Brunswick in his offensive on the west bank of the Rhine. On June 23, the regiment took part in the Battle of Krefeld where it was deployed in the centre in Lieutenant-General Oberg's Brigade (6 battalions). This brigade was ordered to make a diversion towards Sankt-Tönis. On September 29, the regiment was part of the Corps of the Duke of Holstein who was surprised in its camp at Bork. It was thrown into the village of Bork to delay the French advance. It then retired in good order with the rest of the Allied corps.

In June 1759, the regiment was part of Wangenheim's Corps who had taken position at Dülmen in Westphalia to observe the movement of a French corps under the Marquis d'Armentières. On August 1, the regiment took part in the Battle of Minden where it was deployed in Wangenheim's Corps between Kutenhausen and the Weser, in the first line of the infantry centre. It took part in the assault of the village of Todtenhausen on the right flank.

In 1762, the regiment served under Prince Ferdinand of Brunswick in the siege of Kassel. On October 31, the regiment suffered heavy losses during a sortie of the defenders. On November 1, Kassel finally surrendered and the regiment formed part of the garrison. At the end of December, it was sent to occupy Hanau. 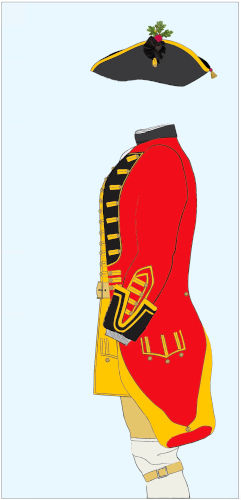 The drum pattern had hoops in alternating black and red diagonal stripes, white drum cords over a brass drum with the Arms of Hanover in the centre.

Regimental Colour: Yellow field, within a red scroll bordered by ivy; centre device consisting of a scene depicting Samson wrenching the lion's jaws apart; scroll carrying the motto NE MORTEM SED INFAMIAM VEREOR. Hereafter, we present an illustration from the Reitzenstein Sammlung, dating from circa 1761 (left) and the interpretation of Hannoverdidi (right).