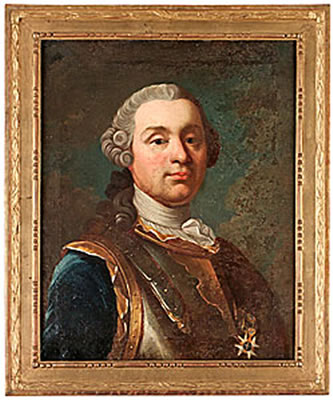 Augustin Ehrensvärd was the son of Jacob Johan Scheffer and Anna Margaretha Mannerheim. He was related to the reformer of the Swedish artillery, Karl Cronstedt his uncle (on his mother side).

In 1726, Ehrensvärd joined the artillery at the age of sixteen, under the command of his uncle Karl Cronstedt. Karl's brother, Jacob Cronstedt made everything to inform the government of his gifted relative. Ehrensvärd's carreer progressed steadily.

Augustin Ehrensvärd was indeed a very gifted drawer and painter. At an early age, he was already renowned for his great mathematical gifts and technical skills. He wanted to change on a lot of things during his life.

In 1734, Ehrensvärd was promoted captain in mathematic and mechanic at the new artillery school.

In 1739, Ehrensvärd returned to Sweden where he married Catharina Elisabeth Adlerheim . The same year, upon the creation of the Royal Swedish Academy of Sciences, Ehrensvärd was elected one of its member.

In 1740, Ehrensvärd became secretary of the Royal Swedish Academy of Science.

In 1744 and 1745, during the Second Silesian War, Ehrensvärd accompanied the Prussian army in its campaign in Bohemia, being present at the battle of Soor (September 30, 1745)

In 1746, Ehrensvärd returned to Sweden where he was promoted major. He also joined the Hats Party (Hattarna) and became member of a special defence-deputation in the Swedish four-chamber parliament (nobles, priests, bourgeoisie and farmers).

In 1747, Ehrensvärd was promoted lieutenant-colonel. He was an apt constructor of new artillery pieces and cannon. He was the rightful successor of the famous Cronstedt who had made the Swedish artillery one of the leading of its time in Europe. He was charged to plan and manage the construction of Swedish fortresses in Finland, especially the fortress of Sveaborg. His most important contribution was the coastal navy that, for a while at the end of the 18th century, became the leading coastal navy in northern Europe.

In 1749, Ehrensvärd started the construction of the fortress of Sveaborg. The same year, he was promoted colonel.

In 1756, Ehrensvärd commanded the army's coastal fleet mostly based in Sveaborg. The same year, he was promoted major-general.

In July 1761, Ehrensvärd received command of the Swedish field army operating in Pomerania. He was then at the height of his intellectual power. Ehrensvärd, against the advices of many old Swedish officers, created an elite light brigade. All commanders of this light brigade were brilliant young officers, Sweden's best without any doubt. Thanks to his political influence, Ehrensvärd managed to obtain reinforcements. Furthermore, a new German Grenadier Battalion was raised by Ehrensvärd among the garrison regiments of Stralsund and placed under the command of Georg Wetterhoff formerly an officer of Åboläns Infantry. Similarly, a new Swedish Grenadier Battalion was raised and placed under the command of Jacob Magnus Sprengtporten who had just recovered from a wound received in the first combat of Malchin. Ehrensvärd never became as popular as the very human Lantingshausen but he had many admirers. During the summer offensive, Ehrensvärd was wounded in the chest by a bullet. The climax of Ehrensvärd's different combats in Pomerania was of course his winter counter-offensive on Malchin between Christmas and the first days of the New Year of 1762, with Sprengtporten light brigade acting as avant-garde. One of the objectives of this offensive was to starve the Prussians, especially von Belling and his light brigade, by cutting them from of their magazines in Mecklenburg. The operation was a beautiful reproduction of pre-1759 Prussian offensives in Pomerania.

In April 1762, Ehrensvärd realised that he could not get enough resources to besiege Stettin effectively. To the risk of being hanged, he then decided to make a separate peace with the Prussian commander-in-chief on this theatre of operation: Eugène Prince of Würtenberg. The truce was concluded on April 7 1762. It was soon followed by the signature of the Treaty of Hamburg on May 22. By the end of May, Ehrensvärd had already returned home to cure the wound received the previous summer.

In 1764, Ehrensvärd was appointed general of cavalry and made a baron.

In 1772, Ehrensvärd was promoted field-marshal.