The regiment was first raised in 1685. From 1740, it was designated by the name of its Inhaber (owner). However, the Inhaber did not take the field with his regiment.

The garrison place of the regiment was Vechta.

At the beginning of the Seven Years' War, the regiment consisted of a single battalion including 7 companies of fusiliers, 1 company of grenadiers and 2 x 4-pdr battalion guns. During the war, its effective strength fluctuated between 880 and 327 men.

During the Seven Years' War, the regimental Inhaber was:

In 1757, the contingent of Münster first assembled in this town. Elverfeldt then counted about 530 men. In August, this contingent marched on Bonn by Meiningen where it was joined by Mengersen Infantry of the diocese of Paderborn. These 3 regiments were then assigned to the guard of the train of the Reichsarmee. In October, the regiment along with Kreisinfanterieregiment Baden-Durlach advanced towards Gera in Saxony. By September, the regiment counted approx. 600 men. In November, it defended the passage of the Saale River at Kösen. On November 4, it counted 643 men. The regiment was not directly involved in the Battle of Rossbach. However, during the withdrawal of the Franco-Imperial Army, the regiment took part in a small rearguard action against Prussian troops where only its regimental artillery was involved. In December, the regiment, who now counted only 592 men, was part of the security line established in the Thuringian Forest. For this reason it became almost impossible for the unit to take its winter-quarters.

At the beginning of the campaign of Saxony of 1758, the regiment was part of the Reserve under General Macquire and was involved into a few advanced posts combats within the empire. In August and September, the regiment took part in the operations in the area of Pirna. During the siege of the Fortress of Sonnenstein, which led to the capitulation of the Prussian garrison, 3 companies of the regiment worked to the trenches. Then in September, the unit joined Hadik's Corps and took part in the advance on the Mulde River. During the retreat, it was in the second line and, along with Kurmainz Infantry (aka Wildenstein), covered the withdrawal. In then went into winter-quarters in the Thuringian Forest.

The campaign of 1759 started early in February, when Ferdinand of Brunswick advanced on Bergen. He detached his nephew, the Hereditary Prince of Brunswick with a division (a third of Ferdinand's force) to clear his left flank before continuing his march from Fulda. The regiment then counted 548 men and was entrenched at Eisenach. It was attacked by this Allied force. It suffered considerable losses (more than 100 men) and was forced to retire to Meiningen where Field-marshal Kolb decided to maintain it. This isolated position was the only foothold of the Reichsarmee to the west of the Thuringian Forest. On April 1, the Hereditary Prince attacked Meiningen and Wasungen, forcing their garrisons to surrender as prisoners of war. The garrison of Wasungen consisted of Nagel Infantry while the Meiningen garrison consisted of Elverfeldt Infantry, now reduced to only 327 men, and Kurköln Leibregiment. In this occasion, the Hereditary Prince also captured 6 guns and 6 flags. During this raid, he made a total of some 2,000 prisoners.

The regiment was not involved into any other action until the end of the war.

Our sources give two very different descriptions for this regiment. We are currently doing further checks. 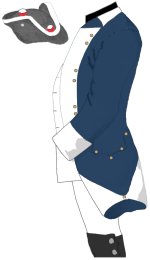 Officers wore the same uniforms as the troopers with the following exceptions:

Drum barrels were of polished brass and were decorated with the arms of the Electoral Prince of Münster. The drum cords were white. The rim was probably decorated with a pattern of alternating sky blue and white rhombuses or dents.

The regiment carried two colours: a Leibfahne and a Regimentsfahne. The flagpoles were probably striped blue and silver and had golden finials.

The Leibfahne had a white field decorated with blue rhombuses (Bavarian pattern). In the center, a shield carrying the cross of the Grand Master of the Deutschen Orden and surrounded by a wreath.