The regiment, counting two battalions, was created on 1 February 1, 1706 for Louis Henri de Bourbon-Condé, Duc d'Enghien. After the death of Louis de Bourbon-Condé, Comte de Clermont, on April 1, 1710, the regiment remained without owner until July 17, 1788.

In 1707, during the War of the Spanish Succession (1701-13), the regiment took part in the attack of the Lines of Stollhofen and in the expeditions in Swabia and Franconia. In 1708, a battalion was sent to Flanders to reinforce the army campaigning on this frontier. While the other battalion remained in Alsace. In 1709, the regiment took part in the Combat of Rumersheim. The regiment remained on the eastern frontier till the end of the war. In 1713, it contributed to the recapture of Landau and to the reduction of Freiburg.

In 1714, the regiment was reduced to a single battalion.

In 1727, the regiment took part in the training camp on the Saône.

In 1733, at the outbreak of the War of the Polish Succession (1733-35), the regiment joined the Army of Germany. In 1734, it took part in the attack of the Lines of Ettlingen and in the capture of Philisbourg. On December 16, it was re-established at two battalions. In 1735, it was at the Battle of Klausen.

In 1742, during the War of the Austrian Succession (1740-48), the regiment was sent to Bavaria along with Auvergne Infanterie. After the expulsion of the Austrians from Bavaria, it penetrated in Bohemia and took part in the capture of Elnbogen and Kaaden and in the relief of Braunau. In 1743, during the retreat of the French army, it was initially posted at Burkenfeld on the Naab, then at Landeshut and later at the Castle of Wörth. The same year it also took part in the affair of Deckendorf, before retiring to the Rhine, and in the combat of Rheinweiler. In 1744, it was initially stationed at Huningue, then at Fort-Louis. It then took part in the recapture of Wissembourg and in the combats of Suffelsheim and Augenheim and in the siege of Freiburg. In 1745, it took part in the attack of Kronembourg. In 1746, it was transferred to the Meuse where it took part in the sieges of Mons, Charleroi and Namur, and in the Battle of Rocoux. In 1747, it distinguished itself in the Battle of Lauffeld. In 1748, it was at the siege of Maastricht.

In 1754, the regiment took part in the training camp of Saarlouis.

On the Seven Years' War, the regiment counted two battalions.

During the Seven Years' War, the regiment ranked 100th. In the absence of a colonel/owner, it was under the command of its successive lieutenant-colonels:

In 1756, the regiment was stationed in Honfleur in Normandy.

In 1757, the regiment joined the Army of the Lower Rhine commanded by the Maréchal d'Estrées for the planned invasion of Hanover. At the end of June, it was at the camp of Bielefeld with d'Estrées' Main Corps. On July 26, the regiment took part in the Battle of Hastenbeck where it was in the column under Chevert who accomplished the flanking movement to attack the Hanoverian left wing in the woods. In this battle, it lost captains Saint-Pont and de Mirval, killed; and Major La Peyouse, aides-majors de Vésigny and Foucard, captains La More, de Bressay, Grandvillars, Mespierre, Tournefort, de Beaumont and de Mont, and 11 lieutenants, wounded. The regiment then followed the Maréchal de Richelieu for the conquest of Hanover. After the Convention of Kloster-Zeven, it followed the main body, led by Richelieu, who encamped at Halberstadt in Prussian territory from September 28 to November 5. The regiment was placed in the centre of the second line. At the end of the year, it took its winter-quarters in the first line of the French army in the city of Braunschweig.

On July 3, 1761, the regiment distinguished itself at the combat of Werl where its elite companies contributed to drive the enemy out of the mill and of the Castle of Schaffhäusen. In September, it was at the siege of Meppen.

At the beginning of 1762, the regiment returned to France where it garrisoned Mézières and Rocroi.

In May 1763, the regiment was transferred to Landrecies and Avesnes. 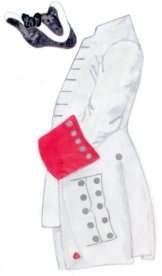