In August 1755, the new fusilier regiment was transferred to Wesel where it replaced Wied Fusiliers while the latter took post at Minden. On May 31 1756, the Hereditary Prince Friedrich of Hesse-Cassel took command of the new regiment.

The numbering system (Stammliste) was first used by Leopold I., Fürst von Anhalt-Dessau (Der alte Dessauer) in the Dessauer Spezifikation from 1737. Around 1780 the numbers were used in the printed Stammlisten, still with some variations for the fusilier regiments. It became official by "Cabinets-Ordre" from October 1, 1806. The present infantry regiment was attributed number 48.

In 1756, the regiment garrisoned Wesel.

In 1758, the regiment initially served in Saxony under Prince Henri. During the Autumn, it joined Wedell in his campaign in Pomerania against the Swedes. However, the regiment was soon recalled to Saxony to defend Dresden.

In 1759, the regiment began the campaign with Prince Henri in Saxony. On May 23, it took part in an engagement against Austrian light troops at Aue. On August 6, during the Austro-Imperial invasion of Saxony, the first battalion capitulated at Leipzig but was allowed to retire freely. On August 20, part of the regiment was part of the garrison of Wittenberg who surrendered and retired to Potsdam. The second battalion took part in the defence of Dresden which surrendered on September 4. The defender were allowed to retire freely from the town and the second battalion joined Finck's Corps. Meanwhile, on September 8, the 1st battalion of the regiment took part in the Combat of Zinna where it was deployed on the left wing. It was at the recapture of Torgau.

In July 1760, the regiment took part in the unsuccessful attempt to recapture of Dresden. On August 20, it fought at the Combat of Strehla before retiring towards Torgau.

In 1761, the regiment served on the Mulde under Prince Henri.

In 1762, the regiment served in southern Saxony. On October 15, Syburg detached the regiment to get hold of the heights of Erbisdorf before Campitelli but it was surrounded and captured as soon as it debouched from the village.

N.B.: The grenadier company, which originated from the Garrison Regiment XIII, never joined the regiment and kept its former uniform until 1776. This company was converged with grenadiers from Dossow Fusiliers (2 coys) and Garrison Regiment IX (1 coy) to form the Nr. II. "Standing" Grenadier Battalion (please refer to this article for the details of the service of the grenadiers during the war).

Privates were armed with a short musket, a bayonet and a straight bladed "pallash".

Lace of the cuff of NCO uniform - Source: E. Boltze Die Infanterie Friedrichs des Großen...
NCOs wore uniforms rather different from those of the privates with the following distinctions:

Lace of the cuff of Officer uniform - Source: E. Boltze Die Infanterie Friedrichs des Großen...
Uniforms of officers were very similar to those of the privates with the following exceptions: 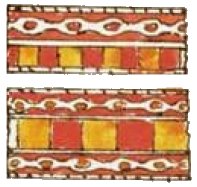 The laces of the drummers consisted of a 2.4 cm narrow lace and a 5.7 cm wide lace, both of the same pattern (white/red/yellow braid).