On August 20 1663, during the Portuguese Restoration War (1640–1668), the king of Spain created the "Tercio de Portugal" in the city of Badajoz from troops of the former Portuguese tercios who had remained loyal to him. In 1665, the tercio was renamed “Tercio Provincial de Valladolid”. In 1666, it remained on the defensive on the frontier of Extremadura. In 1667, it garrisoned Albuquerque. On August 27 1668, it was reduced to nine companies.

In 1672, during the Franco-Dutch War (1672–78), the tercio marched to Catalonia where it joined the Army of Rosellon (Roussillon). In 1674, the tercio took part in the capture of Maureillas and Ceret and in an engagement near Maureillas. In 1675, it defended Puigcerdà. In 1677, it campaigned in Roussillon.

In 1684, the tercio garrisoned Pamplona in Catalonia.

In 1690, during the Nine Years' War (1688–97), the tercio left Pamplona, joined the Army of Catalonia and entered into Barcelona from where it was transported to Rosas aboard galleys. In 1692, it left Rosas and joined the army of the Baron de Preux who invaded the region of Cerdanya. And took part in operations at Pont-de-Molins. In 1693, the tercio defended Rosas who capitulated on June 10. In 1694, it took part in the Battle of Torroella and in the defence of Palamós where it surrendered as prisoners of war. The same year, the tercio was designated as the “Tercio de Verdes Viejos”. In 1696, it was exchanged and returned to Barcelona. In 1697, it took part in the defence of Barcelona which capitulated on August 10 and the tercio retired to Martorell with the honours of war. On August 23, the tercio counted 488 men (including staff) in 15 companies. Five of these companies were sent to Melilla on the coast of North Africa to garrison the place.

In 1700, the tercio was stationed in Catalonia and the five companies previously operating in North Africa returned to Cádiz. These companies were destined to a naval expedition under the command of Admiral Don Pedro Fernandez de Navarrete against the Scottish establishments on the Isthmus of Darien (present-day Panama). However, the expedition was cancelled and the five companies remained as garrison in Cádiz.

In 1701, at the outbreak of the War of the Spanish Succession, the tercio marched from Catalonia to join its five companies posted at Cádiz. In 1702, the tercio took part in the successful defence of Cádiz against a large Anglo-Dutch amphibious force. The tercio was then assigned to the garrison of Cádiz to the exception of 7 companies who were sent to Galicia. In the Spring of 1704, the tercio joined the Army of Extremadura for the war against Portugal, taking part in the siege of Castelo Branco, in engagements at Sárceda and Monsanto. At the end of the campaign, the tercio was assigned to the garrison of Albuquerque where it was reorganised as a regiment. The same year, the five companies who had garrisoned Cádiz took part in the siege of Gibraltar. They were then sent to Badajoz. In 1705, the seven companies garrisoning Albuquerque defended the place. In 1706, the first battalion defended Alcántara and was taken prisoners. Meanwhile, the second battalion had marched to Old Castile where, assisted by local militia, it protected the frontier. When the first battalion was finally exchanged, the entire unit was reunited at Fuencarral near Madrid where it was reorganised. On 28 February 1707, the tercio was transformed into a regiment designated as the “Regimiento de Córdoba”. The same year, it took part in the Battle of Almansa where it lost its colonel and in the siege to Alcoy which surrendered on 10 January 1708. In 1713, it took part in the blockade of Barcelona; and in 1714, in the siege and capture of Barcelona.

On 20 April 1715, the regiment incorporated the disbanded “Regimiento de Alcántara”. In 1716, it was stationed in Andalusia.

On 1 February 1718, the regiment was renamed “Regimiento de España”.

In 1719, the regiment embarked aboard a fleet destined to assist James II to reassess his right to the throne of Great Britain. However, the vessels transporting troops were dispersed by storms before they could land them and the regiment returned to Cádiz where it embarked for Galicia to join the Army of Navarra. It then defended Vigo against a British landing force.

In 1727, the regiment took part in the siege of Gibraltar. In 1728, the first battalion was sent to Cádiz and the second to Ceuta.

In 1732, the entire regiment was assembled at Alicante and took part in the reconquest of Oran. In 1733, it defended Oran against the Moors.

In 1735, during the War of the Polish Succession, the regiment was sent to the District of Extremadura. In 1737, the first battalion was cantoned in Santos, the second in Fuente del Maestre.

In 1741, at the outbreak of the War of the Austrian Succession, the American regiment took part in the successful defence of Cartagena against a British amphibious expedition. Meanwhile, the regiment recently reconstituted in Spain was sent to Dauphiné to effect a junction with a French army to invade the Duchy of Savoy. In 1742, the new regiment campaigned in Dauphiné and took part in the capture of the Castle of Aspremont. In 1743, it took part in the siege of Cherasco. In 1744, it passed the Alps. In 1745, it campaigned in Italy. In 1746, it fought in the battle of Piacenza and then retired in the County of Nice. At the end of the war, in 1748, it returned to Spain and was then sent to Majorca.

In 1751, the regiment embarked at Palma de Majorca and was transported to Barcelona.

In 1757, the regiment was sent to Cartagena de Indias. On its arrival in South America, it detached two piquets towards to Caracas to suppress internal disturbances of that region.

In 1758, the regiment returned to Cádiz.

On December 4 1760, the second battalion of the regiment embarked at Cádiz for Havana. Shortly afterwards, the colonel of the regiment, Don José de Crespo, was appointed governor of Campeche and left the regiment.

On January 22 1761, the first battalion was reviewed and then marched to Old Castile under the command of Lieutenant-Colonel Don Melchor Feliu and cantoned in Palencia. On January 25, Don José de Prado was appointed colonel of the regiment, assuming effective command of the first battalion on August 1. Meanwhile, in June, the second battalion (700 men) finally arrived at Havana aboard a flotilla of 7 ships of the line under the command of Admiral Gutierre de Hevia. A company was detached to Puerto-Rico (probably the town on the Island of Cuba).

In 1762, during the siege of Havana, the second battalion took part in the defence of the city. It initially defended the Morro Castle. When Havana surrendered, on August 14, the survivors of the battalion became prisoners of war. A new second battalion was raised in Toro in Spain and the regiment was sent to garrison Ciudad-Rodrigo. 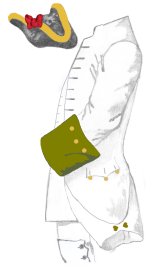 The coronela (colonel flag) of the regiment was white with a red Burgundian cross terminated in each corner by a medallion carrying the arms of the regiment (no information found yet) surmounted by a golden crown. In the middle: the arms of Charles III surrounded by the necklace of the order of the Toison de Oro (Golden Fleece).

The batallonas (ordonnance flags) of the regiment were white with a red Burgundian cross terminated in each corner by a medallion carrying the arms of the regiment (no information found yet) surmounted by a golden crown.