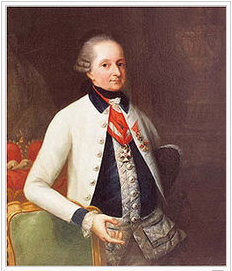 Portrait of Nikolaus Josef Count Esterházy in the uniform of his Infantry Regiment (IR No. 33) – Source: Wikimedia Common

The counts – later on dukes – Esterházy were one of the most honourable Hungarian noble families. Their estates were on the territories of present-day Hungary, Slovakia and Austria.

Nikolaus was the second son of Josef Simon Anton and Donna Maria Anna Louisa dei Marchesi Lunatti-Visconti and was born on December 18, 1714 in Vienna.

As a young man, Count Nikolaus served in an Insurrection hussar regiment.

In 1741, Nikolaus became colonel of this Insurrection regiment.

During the War of the Austrian Succession (more precisely during the Second Silesian War), Nikolaus joined a regular regiment: the Ghilányi Hussars (disbanded in 1768 as Hadik Hussars). In 1744, he was promoted to colonel and commander of this regiment. Count Nikolaus distinguished himself at the head of his regiment at Lauterburg against the French. In 1745, he took part in the battles of Reich-Hennersdorf, Hohenfriedberg and Soor. In 1746, Nikolaus acted as attaché at the Congress in Dresden. The same year, his regiment was sent to the Austrian Netherlands and took part in the Battle of Rocoux and, in 1747, in the Battle of Lauffeld.

On July 6, 1747, Nikolaus was promoted to General Feldwachtmeister (GFWM) and recalled to Vienna. He was instructed to prepare a set of regulations for the hussar regiments of the Austrian Army.

After the death of Adam Count Andrássy, Count Nikolaus was appointed on proprietor of the former Andrássy Infantry (later IR No. 33) on March 9, 1753. He would remain proprietor of this regiment until his death in 1790.

In 1757, during the Battle of Kolin, Count Esterházy led an infantry brigade in a bayonet attack. He lost three horses in these combats. Towards the end of the battle, he rallied some disordered cavalry squadrons and led them in a new, successful attack. For his valour in this battle, Count Nikolaus was promoted Feldmarshall Lieutenant (FML) on June 25 1757 and, on March 7 1758, during the first promotion of the Maria-Theresia-Order, received the Knight Cross of this famous military order.

In the following years, Count Nikolaus took part in most battles of the Seven Years' War as commander of brigades or divisions.

In 1762, after the death of his brother Paul, Nikolaus inherited the title of duke along with the family estates. At the same time, he was appointed governor (Gespan, ispán in Hungarian) of the Komitat of Oedenburg.

In 1763, Nikolaus was appointed first chamberlain of the Kingdom of Hungary and Geheimer Rat (secret councillor) and was admitted in the Order of the Golden Fleece.

In 1764, for the coronation ceremony of Joseph II, Nikolaus assumed the function of Churböhmischer Wahl- und Krönungsbotschafter (ambassador of the Electorate of Bohemia). On April 21 of the same year, Duke Nikolaus was promoted to General-Feldzeugmeister (FZM). In December, he got the honour to be appointed captain of the Hungarian Lifeguard at the Court of Vienna.

In 1765, Duke Nikolaus got the Bohemian indigenat (rights of citizenship and nobility upon foreign nationals) and the highest Order of Habsburg monarchy – the Golden Fleece. On October 15 of the same year, due to the direct recommendation of Emperor Joseph II, Duke Nikolaus received the Commander Cross of the Maria-Theresia-Order in the tenth promotion of this military order (he was the first one to receive this honour).

In 1778, during the war with Prussia, Duke Nikolaus raised 200 hussars at his own expenses.

On July 11 1783, Emperor Joseph II decided that all successors of Duke Nikolaus Esterházy - men and women – shall have the title of “Duke” (until this date only the eldest son got this title).

Nikolaus was not only an excellent soldier. He also supported the well known composer Hayden and other musicians, erected beautiful castles (Esterháza/AT) and acted as maecenas of the arts.

He was known as Der Prachtliebende (the lover of splendour).