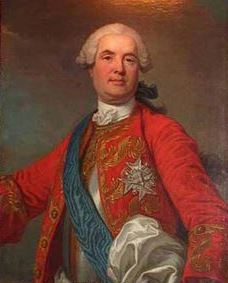 On May 4 1697, when he was not yet two years old, Louis Charles César Le Tellier was received Knight in the Order of Malta (Sovereign Military Hospitaller Order of Saint John of Jerusalem, of Rhodes and of Malta).

In 1716, Louis Charles César Le Tellier entered in the military service as cadet in the mestre-de-camp company of Anjou Cavalerie, under the name of Chevalier de Louvois.

On March 8 1717, the Chevalier de Louvois obtained a company in Anjou Cavalerie.

On March 22 1718, the Chevalier de Louvois was promoted mestre-de-camp-lieutenant in Royal-Roussillon Cavalerie.

The Chevalier de Louvois first saw active service in Spain under the Maréchal de Berwick against King Philippe V. In 1719, he served at the sieges of Fontarabie, Saint-Sébastien, d'Urgel et de Roses.

Shortly after this campaign, King Stanislas Leczinski who had lost the throne of Poland, left the Duchy of Deux-Ponts to establish himself at Weissembourg, under the protection of France. The regent sent the regiment under the command of the Chevalier the Louvois to Leczinski.

By a decree of April 19 1722, the Chevalier de Louvois was assigned, during his nephew's minority, to the charge of captain-colonel of the Compagnie des Cent-Suisses of the king's guard. Louis Charles César Le Tellier then took the name of Marquis de Courtenvaux.

In 1733, during the War of the Polish Succession, the now Marquis de Courtenvaux served at the Siege of Kehl which capitulated on October 28. The same year, he ceded the charge of captain-colonel of the Compagnie des Cent-Suisses to his nephew who had now reached his majority.

On February 20 1734, the Marquis de Courtenvaux was promoted brigadier. On May 4, he fought at the Combat of Etlingen. He also took part in the sieges and captures of Philippsburg, on July 18, and Worms, on July 23.

On April 1 1735, the Marquis the Courtenvaux was promoted maréchal-de-camp and abandoned his command in Royal-Roussillon Cavalerie.

In 1736, the Marquis the Courtenvaux became a Freemason.

In May 1739, at the death of the last Maréchal d'Estrées, the Marquis de Courtenvaux inherited the title of Comte d'Estrées from his mother's lineage (sister of the last maréchal).

On April 22 1740, the king gave the Comte d'Estrées the charge of inspector-general of the cavalry.

During the War of the Austrian Succession, the Comte d'Estrées first served at the Army of Bohemia and Bavaria in 1741. With the Comte de Saxe's Corps, he was charged with the blockade of Eger (present-day Cheb). During the following winter, he assumed command of the troops quartered around Pilsen.

In 1742, when the French abandoned Písek, Estrées' Corps was dangerously exposed at Pilsen and he had to conduct them to Prague by a difficult and dangerous march. He had barely reached Prague that he was ordered to throw his corps into Eger. He led his corps to Eger across enemy territories. He occupied Eger until he was ordered to make a junction with Maillebois' Corps. He then left Eger, marched back to Bavaria and finally returned to France in January 1743 along with the French troops that the Maréchal de Belle-Isle had brought back from Prague.

In May 1743, Estrées joined the Army of the Rhine where he had to replenish the ranks of the cavalry. He threw a bridge of the Main to ease the crossing of this river. He was then detached on the Neckar where he prepared the march of the Maréchal de Broglie who was coming back from Bavaria.

In 1744, Estrées was employed in the Army of Flanders where he was promoted lieutenant-general on May 2. While the Maréchal de Saxe was encamped at Courtrai, Estrées covered the frontier against the enterprises of the Allies (about 80,000 men) who had occupied the neighbourhoods of Lille. He managed to successively contain them at Maubeuge, Valenciennes and Douai.

In 1745, Estrées distinguished himself at Fontenoy, on May 11, where he had his horse killed under him. He charged the British column twice at the head of the cavalry. He was among the generals who, at the head of the Maison du Roi, led the decisive attack. He was then detached to pursue the Allies, capturing 4,000 men. He besieged Dendermonde and led the observation corps during the Siege of Ath which surrendered on October 8.

On January 1 1746, Estrées became a Knight in the Ordre du Saint-Esprit (Order of the Holy Spirit). During this campaign, he was once more employed at the Army of Flanders where he had the command of corps of 24 battalions and 25 squadrons. In May, at the head of his corps, he forced the Allies to retire from Breda. From June 7 to 11, he took part in the siege and capture of Mons. With a corps of 12 battalions and 4 squadrons, he then covered the Siege of Charleroi which capitulated on August 2. On October 11, he led one of the French attacks during the Battle of Rocoux.

In 1747, at the head of a detachment, Estrées prepared the advance upon Maastricht. On July 2 at Lauffeld, at the head of a French Division, he conducted a successful flank movement. For the rest of the campaign, he was in command of the Reserve, containing the Allies in the area of the Saint-Pierre Mountain between Jaar and the Meuse River. During the following winter, he took his quarters in Hainaut and became governor of Aunis and La Rochelle.

In 1748, Estrées was back to Flanders once more. He first led a convoy to Berg-op-Zoom, then covered the Siege of Maastricht which fell on May 7.

In 1755 and 1756, Estrées was in command on the coasts of Normandy and governor of Le Havre. The king sent him to Vienna during the negotiations with the Court of Austria.

On February 24 1757, a few months after the outbreak of the Seven Years' War, Estrées was promoted Maréchal de France. The following day, he signed the Franco-Austrian treaty. The same year, he was placed at the head of the French Army assigned to the invasion of Hanover. He crossed the Weser and established his headquarters in Münster from May 25 to June 3. On July 26, he won the Battle of Hastenbeck against Hanoverian and Hessian troops under the Duke of Cumberland. He then submitted the town of Hameln on July 28 and captured Minden on August 3. Despite his victory against the Allies, he was removed from command due to court intrigues and replaced by the Duc de Richelieu on August 3.

On August 15 1759, Estrées returned to Germany to assist the Maréchal de Contades.

In 1762, Estrées was reinstated commander of the French Main Army along with the Prince de Soubise. On June 24, these two French commanders were defeated by Ferdinand of Brunswick at the Battle of Wilhelmsthal.

In 1763, Estrées received the title of Duc d'Estrées from his mother's family. He also became member of the Secret Council, an office that he assumed till his death in 1771.