The regiment was raised in 1708. It originated in the troop of artillerymen of the province of Alentejo created in 1706. In 1718, the Portuguese artillery was reorganised.

During the Seven Years's War, the regiment was commanded by:

This regiment changed its coats from white to green in 1754. Not much is known about the 1762 uniform. Here, we assumed that it had retained the main characteristics of the 1754 uniform which consisted of a green coat lined green and of a red waistcoat... However, we do not know the button colour, our description assumes white buttons. The other parts of the description are based on the other Portuguese uniforms. 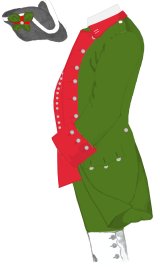 N.B.: the following description is not based on a direct source. It is rather an educated guess based on the usual officer uniform compared to privates of the same regiment.

Manuel Ribeiro Rodrigues and Joseph O'Neil for the initial version of this article.