This regiment pretended to trace its origin back to a unit raised in 1604 by M. de Lémond for Henry IV.

After the siege of Montauban, from 1622 to 1624, a large number of Protestant gentlemen made peace with the king. The powerful House of Bouillon among others rallied to the king. The young Vicomte de Turenne, brother of the Duc de Bouillon, was authorised on January 17 1625 to raise an infantry regiment as part of the preparations of King Louis XIII for the siege of La Rochelle and an expedition in Valtellina.

On 26 May 1626, Turenne Infanterie was disbanded

On March 27 1630, Turenne Infanterie was re-established. The regiment was immediately sent to Piedmont for the War of the Mantuan Succession (1628–31) and took part in the capture of Casale.

In 1631, the regiment was stationed in Lorraine where it remained idle till 1633.

In June 1633, the regiment took part in the reduction of the Castle of Freidemburg near Trier. In September, it was at the siege of Nancy. In 1634, it was among the first regiments to arrive in front of La Mothe, the last and strongest place of the Duc de Lorraine. It was detached for a few days to capture the Castle of Bitche. It then took part in the relief of Heidelberg.

At the beginning of the Fronde (1648-1653), in 1649, Turenne retired to Holland with 8 companies of his regiment who occupied Stenay. Meanwhile, the rest of the regiment, who had remained loyal to the king, served in Flanders. In 1650, Turenne, with the 8 companies who had defected, acted against the court. These companies took part in the siege of La Capelle and in the Battle of Rhétel where Turenne was defeated and his companies annihilated. On 25 May 1651, Turenne Infanterie was disbanded but soon re-established when Turenne made peace with the Cardinal Mazarin. For the campaign of 1651, the regiment initially served in Lorraine, taking part in the siege of Chasté. It was then sent to the Loire where he defended Gergeau. In 1652, it took part in the attack of the suburbs of Étampes, in the siege of Étampes, in the Battle of Faubourg Saint-Antoine, in the sieges of Bar-le-Duc, Château-Porcien and Vervins and took its winter-quarters in Laon. In 1653, it took part in the sieges of Rhétel, Mouzon and Sainte-Ménehould.

In 1659, after the Treaty of the Pyrenees, Turenne offered his regiment to King Charles II of England to help him to regain his throne; but the regiment did not need to intervene and Charles II was restored to the throne of England in 1660.

In 1663, the regiment contributed 20 companies to the small army who occupied Marsal. In 1664, the entire regiment was part of the relief force sent to Hungary to fight against the Turks. It distinguished itself in the Battle of St, Gotthard who saved the Empire. It then returned to France with 4 guns captured during this battle. In 1665, the regiment took part in the siege of Lochem and took its winter-quarters in Holland.

In 1666, the rank of the regiment was fixed, it came immediately after Aquitaine Infanterie. It retained this rank until 1775.

In 1667, at the outbreak of the War of Devolution (1667–68), the regiment campaigned in Flanders and was at the capture of Charleroi, Ath, Tournai, Douai, Lille and Alost, remaining in Lille as garrison. In 1668, a detachment (100 men) of the regiment captured the Castle of Vinendal.

In 1671, the regiment was at the camp of Dunkerque.

In 1672, when the Franco-Dutch War (1672–78) broke out, the regiment was at the capture of Maseyck, Burich, Rees, Saint-Trond, Tongres, Orsoy, Arnhem, Skenke, Nijmegen, Doësbourg, Crèvecoeur and Bommel Island, and at the siege of Zutphen before assuming garrison duty in Naërden. In 1673, it campaigned in Germany and took its winter-quarters in Frankfurt. In 1674, it covered the débouchés of Franche-Comté from Alsace and a detachment fought in the Battle of Sintzheim. The same year, the regiment also took part in the affair of Ladembourg, in the Battle of Ensheim; in 1675, in the victorious Battle of Turkheim, before taking its winter-quarters in Verdun. It was then sent to Colmar and surprised the town of Neubourg. After the death of Maréchal de Turenne, killed by a cannonball on 27 July, the regiment was given to Louis-Auguste de Bourbon, Duc du Maine. The regiment distinguished itself at the defence of the bridges of the Rhine and at the Combat of Altenheim. In 1676, it was transferred to the Army of Flanders, took part in the siege of Condé et and covered the sieges of Bouchain and Aire. In 1677, it took part in the sieges of Valenciennes and Cambrai, and in the Battle of Cassel; in 1678, in the sieges of Ghent and Ypres, in the Combat of Saint-Denis and in the campaign on the Rhine;

By 1684, the regiment assumed garrison duty in Thionville but was sent to the siege of Luxembourg

In 1688, at the outbreak of the Nine Years' War (1688–97), the regiment was attached to the Dauphin's Army and contributed to the capture of Philisbourg, Mannheim, Frankenthal and Mainz. In 1689, it distinguished itself during the defence of Mainz. After the capitulation Mainz, the regiment joined the Army of Flanders. In 1690, the regiment took part in the Battle of Fleurus; in 1691, in the siege of Mons and in the campaign on the Moselle; in 1692, in the siege of Namur and in the Battle of Steenkerque. In 1693, the regiment was transferred from Namur to Germany. In 1694 and 1695, it was employed in the Low Countries where it took part in the combat of Tongeren and in the bombardment of Bruxelles. In 1696 and 1697, it campaigned on the Meuse.

N.B.: during these years, a militia battalion named "Maine" served in the Alps.

In 1698, the regiment went to the camp of Compiègne. On 30 December, the soldiers of the "Fusiliers de Ximénès" were incorporated into the regiment.

During the War of the Austrian Succession, the regiment initially served in Flanders from 1741 to 1743. In 1744, it was part of the French contingent sent to Scotland to support the claims of the Young Pretender. In 1745, it was back to Flanders where it served till 1747.

During the Seven Years' War, the regiment ranked 20th and was under the command of:

In 1756, the regiment was at the camp of Granville.

In 1757, the regiment was sent to Germany to join the Lower Rhine Army under Maréchal d'Estrées. At the end of June, it was at the camp of Bielefeld with d'Estrées's main corps. On July 26, the regiment took part to the battle of Hastenbeck. It was in the column under Chevert who accomplished the flanking movement to attack the Hanoverian left wing in the woods. During this attack, it suffered from a cruel mistake. Indeed, it was placed in the woods of Nimerein where it was fighting a grenadier corps when units of Chevert's column advancing through the same woods fired mistakenly on it. Taken in crossfires, the Eu Regiment was forced to retire after suffering heavy losses. At the end of the year, it took its winter quarters in Emden in Ostfriese, in the fourth line of the French Army.

At the beginning of 1758, the regiment withdrew to the Rhine. In April, when Clermont redeployed his army along the Rhine, the regiment was stationed at Kalkar. After the successful crossing of the Rhine by Ferdinand's army on May 31, the regiment did not join Clermont's army at Rheinberg but was rather deployed at an unspecified location. Later during the year, the regiment returned to France where it served on the coasts of Bretagne. 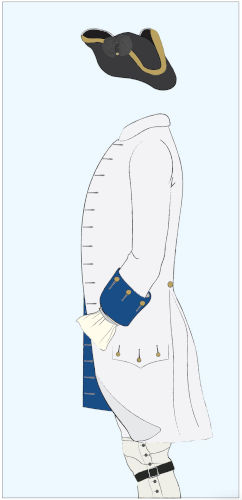 The drummers wore the livery of the House of Maine: red field lined blue with a braid consisting of three smaller braides (one yellow between two blue braids).

The colonel flag was white with a white cross. The ordonnance flags had a white cross with yellow and red opposed quarters.