The unit was created in the Province of Extremadura on February 2 1659 by Captain Don Antonio de Issasi under the name of “Extremadura.” It initially counted 20 companies.

In 1676, the unit was transferred to the Army of Navarra and returned to Extremadura in 1680.

In 1689, during the Nine Years' War (1688–97), the unit joined the Army of Catalonia. In 1691, it took part in the defence of Seo de Urgel, Castellciutat and Barcelona; in 1692, in the engagement at the Pass of Portell and in the invasion of Roussillon; in 1694, in the defeat of Torroella; in 1695, in the blockade of Hostalrich and in an engagement at the Pass of Formich; in 1696, in the combat of Riu de Arenas; and in 1697, in the unsuccessful defence of Barcelona.

In 1701, at the outbreak of the War of the Spanish Succession (1701–13), the unit was sent to Andalusia. In 1702, it took part in te defence of Cádiz against an amphibious expedition of the Allies; in 1704, in the campaign in Portugal, in the blockade of Arronches, in the sieges of Porto Alegre and Castelo de Vide, in the relief of the village of Guzman, in the burning of Ficalho, in the siege of Gibraltar. When the unit was reorganised as a regiment, it took the name of “Viejo de Extremadura.” In 1705, the regiment guarded the frontier of Extremadura and took part in the relief of Jeréz de los Caballeros. In 1707, it was at the sieges and capture of Serpa and Moura. It then took part in the blockade of Olivenza and in the siege and capture of Ciudad-Rodrigo. In 1708, it took part in the dismantlement of the fortifications of Serpa and Moura and in the capture of Barbacena; in 1709, in the Battle of La Gudiña, in the blockade of Olivenza and in the storming of the camp of Telena near the Tagus. In 1710, detachments of the regiment took part in raids in Portugal and in the capture of Carvajales and Puebla; while the rest of the regiment was at the attack of Balaguer. The entire regiment then fought in the battles of Saragossa and Villaviciosa. The regiment then rejoined the Army of Extremadura. In 1711, the regiment drove back the Portuguese from Zafra. In 1712, it took part in the siege of Campo-Major. In 1713, the regiment covered the frontier between Castile and Portugal. In 1714, it formed part of the force under the command of the Marquis de Toy who covered the siege of Barcelona.

In 1719, the regiment took part in the campaigns against France in Navarre and Catalonia.

In 1736, the regiment re-embarked for Spain where it joined the garrison of Barcelona. In 1738, it took up cantonments in Manresa.

In 1763, the regiment was renamed “España Cavalry.”

In April 1762, the regiment joined the army assembling for the planned invasion of Portugal. It was deployed on the left wing of the first line. On October 7, the regiment took part in the surprise attack of the ford of Villabelha where it lost Lieutenant Don José Alderete. On October 31, it took up cantonment in Membrio and, on November 14, in Alcántara. 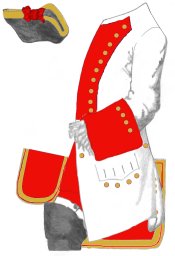 The standards were made of damask or silk, fringed and embroidered in gold. They had red cravats with gold tassels.

Obverse: red field, centre device consisting of the Royal Spanish Arms surrounded by the necklace of the Order of the Golden Fleece; all embroideries in gold.

Volker Scholz for the information on standards.