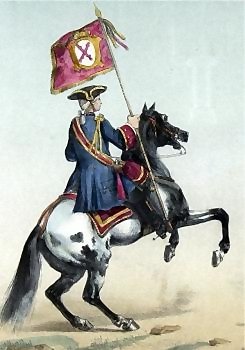 In the Spring of 1701, at the outbreak of the War of the Spanish Succession (1701–13), the 2 squadrons of the regiment were stationed in the Spanish Netherlands. In 1702, it served in the Electorate of Cologne. And took part in an offensive on the Lower Rhine. In 1703, it campaigned in the Spanish Netherlands; and in 1704, in Alsace. In 1705, the regiment took part in the siege and capture of Huy. In 1706, it was posted in the Lines of Stokel. In 1707, it took part in an offensive in Swabia; in 1708, in the engagement of Wijnendale; in 1709, in the Battle of Malplaquet. In 1710, the regiment was transferred from Flanders to Catalonia and was soon allocated to the Army of Extremadura. In 1711, the regiment campaigned in Portugal. In 1712, it returned to Spain and took part in the campaign in Catalonia.

In 1718, the regiment was sent to Sicily, occupied Palermo and took part in the capture of Messina and in the victorious Battle of Milazzo. In 1719, it fought in the Battle of Francavilla. In 1720, it sailed back to Barcelona.

In 1733, at the outbreak of the War of the Polish Succession (1733–35), the regiment marched to Antibes where it embarked for Tuscany. In 1734, it took part in the Battle of Bitonto and in the reconquest of the Kingdom of Naples. It was then transferred to Sicily where it participated in the blockade of Syracuse. It then re-embarked for Naples. In 1735, it campaigned once more in Sicily and ended the war in Lombardy.

In 1745, during the War of the Austrian Succession (1740–48), one squadron of the regiment was sent to reinforce the Army of Italy. It took part in the siege and capture of Tortona, in the Battle of Bassignano and in the occupation of Milan. In 1746, it participated in the siege of the citadel of Milan, in the Battle of Piacenza. After this defeat, it retired to Provence and then to Spain.

On April 18, the regiment marched through Old Castile to Zamora join the army assembling for the planned invasion of Portugal. On May 1, it passed the frontier as part of the first column under the Count de Maceda who took position at Ciudad-Rodrigo. On June 5, this column advanced into Portugal. From July 6 to August 25, the regiment took part in the Siege of Almeida. It campaigned until October 31 and then took up cantonments in Villar del Rey and Arroyo del Puerco. On November 14, it retired to Castile. 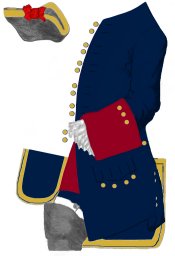 The standards were made of damask or silk, fringed and embroidered in gold. They had red and yellow cravats with gold tassels.

Obverse: red field, centre device consisting of the Royal Spanish Arms surrounded by the necklace of the Order of the Golden Fleece; all embroideries in gold.

Reverse: red field, centre device consisting of the regimental emblem, a golden cartouche with a silver or white oval shield and a red Burgundian cross. The cartouche is surmounted by the royal crown; all embroideries in gold.

Volker Scholz for the information on standards.