The place of Ceuta, located in the old Province of Tingitana, was conquered from the Moors by the Portuguese in 1415. A treaty signed between Spain and Portugal in 1668, Ceuta was ceded to Spain. The garrison, which consisted of only two companies known as “Banderas Vieja y Nueva”, was immediately increased to 6 companies with troops recruited in Andalusia. By the end of the XVIIth century, this garrison counted 18 companies.

Since 1694, Muslim armies were continually blockading or besieging the place of Ceuta.

On August 1 1703, King Philip V ordered to organise these 18 companies into a regular tercio that would be known as the “Tercio de Ceuta”.

During the War of the Spanish Succession (1702-1713), in May 1703, the garrison companies defending Ceuta took part in a sortie. In August, the tercio captured an artillery piece before retiring in the defensive works. In 1704, part of the tercio served with the navy while the rest continued to defend Ceuta. In 1705, the tercio conquered the ground where the counterguard of Santiago would be erected. On November 7 1706, the tercio took part in the attack on Negron Creek. In 20 November 1708, it drove back an attack of the Muslim besiegers. On December 26 1709, the Moors attacked again and were totally defeated .

In 1714, the regiment drove back another assault of the Moors. In May 1720, it managed to establish a line of communication between Ceuta and the new Colorado Redoubt. It continued to defend Ceuta until 1734.

In 1741, the regiment was renamed “Regimiento de Ceuta Fijo”.

In 1743, during the War of the Austrian Succession, the regiment joined the Army of Italy. Soon after its arrival, it took part in the Battle of Campo Santo (February 8). It then retired with the rest of the army to Pesaro and then to the Kingdom of Naples. In 1744, a strong detachment embarked aboard the fleet and fought against Turkish corsairs. The same year, another detachment was sent to Genoa to prevent the landing of a British force. It later joined the army for an attack on the entrenched lines of the Piedmontese. Still another detachment campaigned in Lower Italy. In September, the detachment operating in Upper Italy took part in the siege of Coni and in the Battle of Madonna dell'Olmo. Finally, in November, the detachment operating in Lower Italy participated in the action at Ponte Mole on the Tiber. Meanwhile, a last detachment was still defending Ceuta. On October 6, the Moors captured the place of arms and transported the defenders to Tangier. In 1745, the two detachments operating in Italy were reunited, attacked Ottagio, captured Tortona and Piacenza and fought in the Battle of Bassignano. In 1746, the detachment operating in Italy was transported on the Po to Stradella and took part in the action at Codogno. The detachment was then transported to Ceuta.

In 1748, the grenadier company of the regiment returned to Granada in Spain.

In 1751, the regiment defended Ceuta against the Moors and took part in naval operations against Tangier. From 1752 to 1755, the regiment continued to take part in the defence of Ceuta.

In 1756, part of the regiment embarked aboard xebecs to fight to Morrocan corsairs, pursuing them up to Tétouan and burning their schooners.

On 23 May 1757, the regiment drove back an assault of the Arabs against Ceuta. On December 6, it took part in a sortie where Captain Don Gaspar Rodriguez and Lieutenant Don Francisco Melendez , both of the grenadier company, distinguished themselves.

On June 10 and December 10, the regiment took part in sorties.

In 1761, the regiment salvaged the guns of a Dutch frigate which had been shipwrecked and recovered an English pink which had been captured by the Moors along the coast. 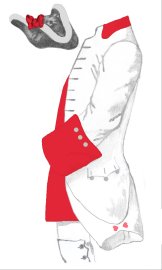 The coronela (colonel flag) of the regiment was white with a red Burgundian cross terminated in each corner by a medallion carrying the arms of the regiment (a silver field with 5 blue escutcheons, each bearing 5 white circles, the whole surrounded by a red band carrying golden towers) surmounted by a golden crown. In the middle: the arms of Charles III surrounded by the necklace of the order of the Toison de Oro (Golden Fleece).

The batallonas (ordonnance flags) of the regiment were white with a red Burgundian cross terminated in each corner by a medallion carrying the arms of the regiment (a silver field with 5 blue escutcheons, each bearing 5 white circles, the whole surrounded by a red band carrying golden towers) surmounted by a golden crown.