The first troops to garrison the Island of Cuba were those of Governor Diego Velasquez who, in 1515, installed 100 men under the command of a captain on the point of Havana. By 1590, this garrison counted 300 men now designated as the troops of the “Presidarias de la Habana”. By 1634, the garrison counted 450 men and a fort designated as “La Fuerza” was constructed to accommodate them.

On April 11 1719, the companies of the garrison were amalgamated into a Batallon fijo de la Habana consisting of 6 fusilier companies of 100 men each, 1 grenadier company of 100 men, 1 cavalry company and 1 artillery company. The staff of this battalion consisted of one commandant, one adjutant, one chaplain, one surgeon and 1 tambour-major. Each company consisted of:

Considering the difficulties of recruitment, each company was authorised to include 20 men native from Havana on the condition that they were of Spanish ascendancy and they do not occupy any other charge in the colony.

The garrison had to man several forts: Morro, Punta, Fuerza, Cogimar and Chorrera. The small detachments occupying these forts were relieved each eight days. Another detachment occupied the more distant Fort of Matanzas and, for this reason, was relieved only each two months.

In 1719, 100 men of the battalion under Captain Don Alfonso Carrascosa embarked aboard a squadron commanded by Brigadier Don Gregorio Guaso, governor of Cuba. This squadron captured two French frigates when the Fort of Panzacola (present-day Pensacola) surrendered and brought back the captured officers to Cuba. Then the detachment of the battalion returned to Pensacola and occupied the town. Pensacola was then attacked by six ships of the line and the detachment was completely defeated despite its brave resistance.

In 1727, five additional companies of 50 men each arrived from Spain to reinforce the garrison who had to prevent the incursions of buccaneers. These new companies were nicknamed “Blanquillos”.

In 1742, during the War of the Austrian Succession, part of the battalion joined the force of approx. 2,000 men (including militia) sent to destroy the plantations of the British colony of Georgia. The expedition was a failure. In 1747, part of the battalion reinforced the fleet of Lieutenant-General Don Andres Regio. On October 12, 1748, this detachment took part in the Battle of Havana against the British fleet of Rear-Admiral Charles Knowles.

The unit took part in all the conflicts in the Caribbean Sea, including the interventions in Florida.

On April 8 1753, the viceroy of New Spain, the Count de Revilla-Gigedo, received instructions from the king to reorganise the units of his forts of Santiago de Cuba, San Agustin de Florida and San Marcos de Apalache. The old battalion was transformed into a regiment designated as the "Regimiento de Infanteria fijo de La Habana" and increased to:

The staff of the new regiment consisted of:

Each company consisted of:

The new regiment had to send two detachments (450 men and 310 men) to Florida.

Troops were usually recruited in the Canary Islands and in Mexico from white peoples. Exceptionally, drummers were often black peoples.

After the capture of Havana by the British in 1762, the regiment was disbanded.

In 1762, during the British siege of Havana, 700 men of the regiment formed part of the garrison. At the capitulation of the city, the regiment ceased to exist. 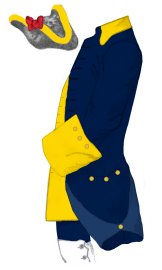 Coronela: White with a red Burgundian cross; corner devices consisting of a medallion carrying the regimental badge (three golden towers and an golden key on an azure field) surmounted by a golden crown; centre device consisting of the arms of Charles III surrounded by the necklace of the order of the Toison de Oro (Golden Fleece).

Sencillas: White with a red Burgundian cross; corner devices consisting of a medallion carrying the regimental badge (three golden towers and an golden key on an azure field) surmounted by a golden crown.

Jean-Pierre Loriot for gathering information for this article.

Volker Scholz for information on colours.