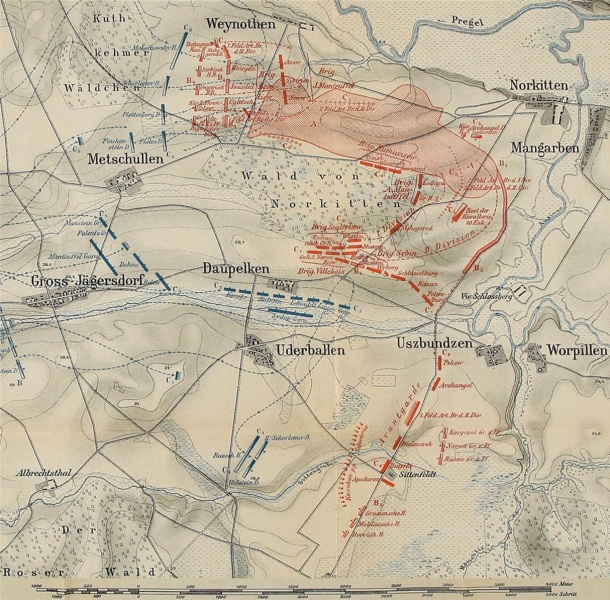 C2 = Battery on the right wing

C4 = Infantry left wing with a battery in the middle

C5 = Battery on the left wing

Red dashed lines = Movements of the Russians until 6:00 a.m.
A (red hatched area) = Russian camp
B1 = Beginning of the march of the avant-garde at 4:00 a.m.
B2 = Outposts occupied by Leontiev<s Brigade which was part of the Third Division (Browne)
B3 = 1st Field artillery brigade of the 1st Division (Fermor) near the outposts
B4 = Hussars near the outposts
B5 = 2nd Moscowskiy Infantry with 2 mortars and 2 field guns in the outposts
B6 = Russian Horse Grenadiers and Hussars along with irregular units near Sittenfeldt
C (solid red boxes) = Positions of Rrussian units during the initial combat at 6:00 a.m.

C7 = 2nd Division (Lopushin) deploying at the edge of the forest

This file contains additional information, probably added from the digital camera or scanner used to create or digitize it. If the file has been modified from its original state, some details may not fully reflect the modified file.
Retrieved from "http://kronoskaf.com/syw/index.php?title=File:1757_Battle_of_Gross-Jägersdorf_6am.jpg&oldid=9825"