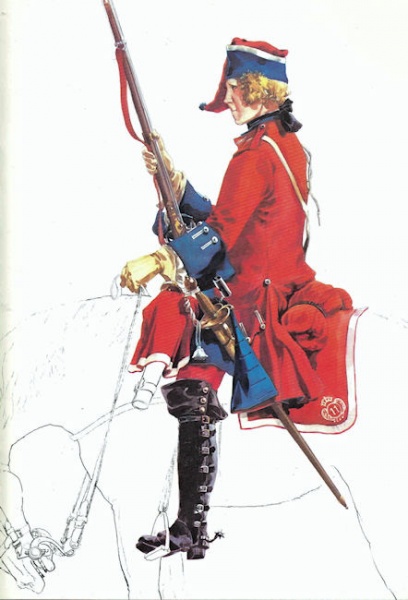 Typical uniform of a French dragoons in 1735 (Dragons de Vitry). The cut of the uniform at the beginning of the Seven Years' War was still quite similar.

Copyright: Michel Pétard who kindly authorised us to reproduce this plate in "Kronoskaf - Project SYW".

This plate has been originally published in the magazine Uniformes Number 66 in March-April 1982.

This file contains additional information, probably added from the digital camera or scanner used to create or digitize it. If the file has been modified from its original state, some details may not fully reflect the modified file.
Retrieved from "http://kronoskaf.com/syw/index.php?title=File:French_Dragoon_Uniform.jpg&oldid=1722"