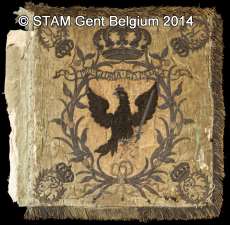 Eskadronstandarte of Bredow Cuirassiers. This standard replaced an "FWR" pattern standard issued around 1717, that was captured in an ambush at Holitz (July 12 1758). When the regiment surrendered at Maxen (November 20 1759) this standard and one other were presented by Maria Theresa to Joseph, Comte de Saint-Ignon (1720-1779). Saint-Ignon presented this standard to the Saint George Crossbow Guild of Ghent, Belgium, of which Saint-Ignon was a member, and laid up in their chapel.

The standard is now loan to, and is on display in, the Stadsmuseum Gent. The Museum holds the copyright on this photograph and it may not be reproduced in any form without written permission from STA.M.

This file contains additional information, probably added from the digital camera or scanner used to create or digitize it.

If the file has been modified from its original state, some details may not fully reflect the modified file.