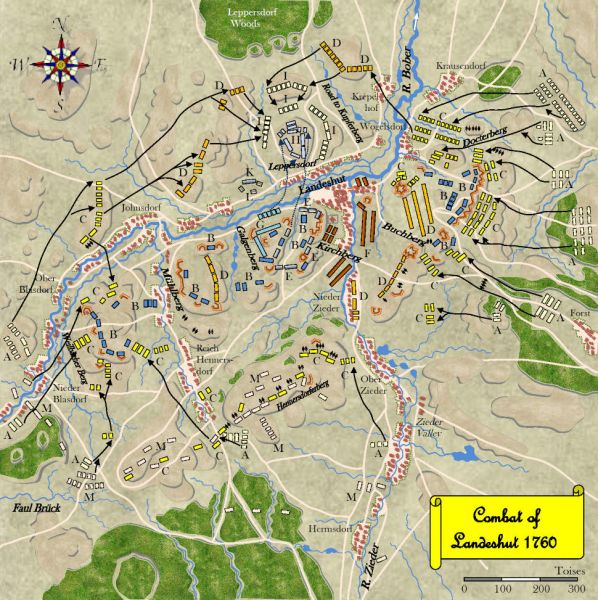 A Points of assembly of the Austrian troops..
B Camp and positions of the Prussian army on eight heights garnished with entrenchments which were not simple redoubts or flèches but solid and regular works, equipped with small forts, trenches, palisades and drawbridges with deep ditches.
C Initial positions of the Austrians prior to the attack of the entrenchments.
D Second positions of the Austrians after having dislodged the Prussians from their redoubts and entrenchments on the Buchberg and Doktorberg and the two other heights, known as Weilbacher (aka Ziederberg) and Mühlberg (aka Mummelberg).
E Second position of the Prussians on the Kirchberg.
F Third position of the Austrians for the attack of the Kirchberg.
G Third rallying point of the Prussians on the Galgenberg, where the Austrians came to attack them as well. The Prussians made their last effort, passed precipitously the small Bober River to reach the heights of Leipersdorf (probably Reussendorf)
H The heights of Leipersdorf, which the Prussians wanted to cross to reach the woods of the same name and then to find the road leading to Kupferberg.
I Austrian troops who encircled the Prussians in the open and forced them to put down arms at 8:00 a.m.
K General Fouqué trying to escape with a grenadier battalion and surrounded by troops of General Nauendorff.
L The Jung-Löwenstein Chevauxlegers commanded by Colonel Voit, who broke through the square formed by the Prussian grenadier battalion and took them prisoners, along with the wounded General Fouqué.
M The Corps of General Wolfersdorff before the battle.