The regiment was created on September 13, 1684. Indeed, expecting a Coalition to soon form against France, Louis XIV raised 30 new regiments from September 1 to 30 for the defence of the various places of the realm. By raising one regiment a day, he avoided any problem of precedence among these new regiments.

The regiment initially consisted of 15 companies, many of them contributed by Normandie Infanterie and La Marine Infanterie.

In 1688, at the outbreak of the Nine Years' War (1688-97), the regiment was increased to 20 companies. The same year, it took part in the capture of Philisbourg, Manheim, Frankenthal and other places in Palatinate. In 1689 and 1690, it campaigned on the coasts of Normandy. In 1691, it was sent to the Alps where it participated in the submission of Montmélian and Chambéry. In 1692, it served in Flanders and was at the siege of Namur and at the Battle of Steenkerque. In 1693, it took part in the Battle of Landen and in the siege of Charleroi. In 1694 and 1695, the regiment was attached to the Army of the Meuse. In 1695, it defended Namur.

On 1 February 1701, on the eve of the War of the Spanish Succession (1701-13), the regiment, which initially counted a single battalion, was increased to two battalions. It initially served in Flanders. In 1702, it took part in the combat of Nijmegen and in an engagement at Moock. In 1703, the regiment was transferred to the Army of the Rhine. Its first battalion took part in the siege of Kehl, in the attack of the Lines of Stollhofen, in the Combat of Munderkirchen, in the Battle of Höchstädt and in the capture of Kempten, Ulm and Augsburg. Meanwhile, its second battalion took part in the sieges of Alt-Breisach and Landau, and in the Combat of Speyerbach. In 1704, the entire regiment took part in the Battle of Blenheim and in the defence of Breisach. In 1705, it served on the Rhine. In 1706, it took part in the relief of Fort-Louis, in the capture of Drusenheim, Lauterbourg and Marquisat Island; in 1707, in the capture of the Lines of Stollhofen and of Schorndorf, in the conquest of Suabs-Gemunden and in all of Villars’ expeditions on the banks of the Rhine. In 1708, the regiment was sent to Flanders and took part in the glorious defence of Lille. In 1709, it fought in the sanguinary Battle of Malplaquet. In 1711, it defended Bouchain and was taken prisoners of war. A battalion was formed with the soldiers who managed to escape but this unit was not employed for the rest of the war.

In October 1733, at the beginning of the War of the Polish Succession (1733-35), the regiment was sent to Italy where it served at the sieges of Gera d’Adda, Pizzighetone and Milan. In 1734, it took part in the sieges of Novara, Tortona and Fort Arrona, and in the battles of Colorno, San Pietro and Guastalla; and in 1735, in the sieges of Revere, Reggio and Reggiolo.

In September 1736, the regiment returned to France and was stationed at Landau in the Palatinate.

In March 1742, during the War of the Austrian Succession (1740-48), the regiment was initially posted at Amberg but was soon sent to the relief of Bohemia where it took part in the combat of Sahay, the relief of Frawenberg and the defence of Prague where it suffered heavy losses. In 1743, the regiment retreated to France, on its arrival it counted only 2 officers and less than 300 men. It was then stationed at Saint-Omer. Once properly re-established in 1744, the regiment was sent to Italy where it participated in the capture of Nice, Montalban, Chateau-Dauphin and Démont, in the siege of Coni and in the Battle of Madonna del’Olmo. In 1745, it was stationed on the Alpine frontier and took part in the combat of Josseau. In 1746, it returned to Italy and took part in the siege of Acqui and in the Battle of Piacenza and Rottofreddo before retiring to Provence. In 1747, it defended Provence against an invasion. In 1747, it fought in the combat of Vintimiglia.

At the beginning of the Seven Years' War, the regiment counted only one battalion. A second battalion was created on August 30, 1762 and the regiment was assigned to colonies and harbours service.

During the Seven Years' War, the regiment ranked 82nd and was under the command of:

In 1756, the regiment was stationed at the camp of Le Havre.

In March 1757, the regiment set off for Stockheim to join the Army of the Lower Rhine. At the end of April, it distinguished itself at the capture of Lippstadt where it was placed as garrison till the end of the campaign. At the end of the year, it took up its winter-quarters in the first line of the French Army at Hattdorf.

In April 1758, when Clermont redeployed his army along the Rhine, the regiment was stationed at Kleve. After the successful crossing of the Rhine by Ferdinand's army on May 31, the regiment retired towards Rheinberg where it joined Clermont's army on June 2. It remained in this camp until June 12 and was placed in the centre of the first line. In July, after the French defeat at Krefeld, the regiment was thrown into Düsseldorf. On August 5, it formed part of Chevert's corps and took part in the Combat of Mehr where it was brigaded with Brancas Infanterie and distinguished itself, its brigade being the last one to retire from the battlefield. The regiment then was sent back to France.

In 1760, the regiment was sent to Saint-Domingue (Haiti) where it remained until July 1765 and then returned to France.

On April 30, 1762, the regiment was increased to two battalions. On December 10, it was assigned to colonies and harbours service. It would remain in Saint-Domingue until 1765. 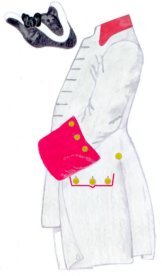 Ordonnance colours: a white cross; each canton consisted of a green and an isabelle (coffee) triangles disposed in opposition.