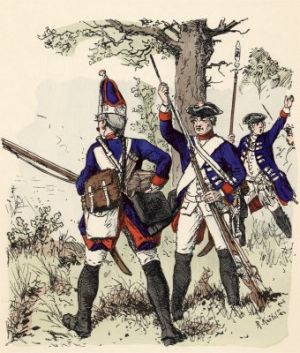 This regiment was raised in May 1713. Its troops originally came from the Grenadier-Garde and Füsilier-Garde.

During the Great Northern War, the regiment served in Pomerania in 1715 and 1716.

From 1716, the regiment garrisoned Berlin. It levied its recruits in Brandenburg, more precisely in the districts of Niederbarnim,Oberbarnim, Stolpe and Teltow and in the cities of Liebenwalde and Oranienburg.

King Frederik II used to say about this regiment "If I want to see good soldiers then I must see this regiment". Together with IR13 Itzenplitz and IR15 Garde, it was one of the finest Prussian regiments.

The numbering system (Stammliste) was first used by Leopold I., Fürst von Anhalt-Dessau (Der alte Dessauer) in the Dessauer Spezifikation from 1737. Around 1780 the numbers were used in the printed Stammlisten, still with some variations for the fusilier regiments. It became official by "Cabinets-Ordre" from October 1, 1806. The present infantry regiment was attributed number 23.

The regiment was disbanded in October 1806 after the capitulation of Erfurt and Stettin.

On August 26 1756, when the Prussian Army was ordered to proceed to the invasion of Saxony, the regiment was part of the centre column led by Frederick II. More precisely, it belonged to Margarve Karl's Corps. The centre column had concentrated in the area of Brietzen and advanced unopposed upstream along the Elbe River by Torgau and Wittenberg, leaving Meissen to its left. On September 6, it encamped at Rothschönberg and finally reached Wilsdruf. While the Prussian Main Army moved forward to engage the Austrian Army at Lobositz (October 1), the regiment remained in the Pirna Country to maintain the blockade of the Saxon Army which surrendered on October 17.

On August 4 1758, during the retreat of the Prussian Army after the failure of the invasion of Moravia, the regiment escorted the train to Politz (present-day Police nad Metují). On August 10, it was part of the corps who accompanied Frederick when he marched from Silesia to join Dohna to contain the Russian invasion of Brandenburg. On Tuesday August 22, this corps made a junction with Dohna at Manschnow. On August 24, the regiment along with Grenadier Battalion 1/23 occupied Darmietzel to secure the crossing of the Mietzel. On August 25, the regiment fought at the Battle of Zorndorf where it formed part of the first line of the right division led by the Count zu Dohna. While pursuing retiring Russian units, it seized most of the army-chest, baggage and artillery. On September 2, when it became clear that the Russian Army was slowly retiring towards Landsberg, Frederick assembled the corps that he had brought with him from Silesia and left for Saxony where his help was badly needed. On October 13, the regiment escorted Frederick when he went personally to Weissenberg to reconnoitre the area of Hochkirch. On October 14, the regiment took part in the Battle of Hochkirch where it was initially deployed in the first line between Hochkirch and Zieten's Cuirassier Brigade. It was the first regiment to come to the rescue of the three struggling grenadier battalions. It drove back some Austrian battalions before being turned by Löwenstein Dragoons and overwhelmed.

In 1759, the regiment spent the campaign at the camp of Schmottseiffen and did not take part in any major action.

On August 15 1760, during the Austro-Russian campaign in Silesia, the regiment fought in the Battle of Liegnitz where it was initially deployed on the left wing. On September 17, the regiment fought in the Combat of Hochgiersdorf. On November 3, it took part in the Battle of Torgau where it lost some 600 men dead or wounded (including 15 officers).

On July 21 1762, the regiment took part in the Battle of Burkersdorf where it was deployed on the right wing under Lieutenant-General Manteuffel. From August to September, the regiment was present at the siege and recapture of Schweidnitz. By October 14, it formed part of Manteuffel's Corps posted at Barsdorf.

The uniforms depicted in this section were first issued in 1743. 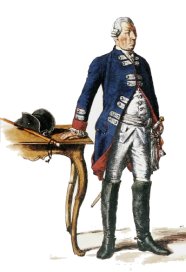 The drummer lace consisted of a white braid decorated with a blue pattern.