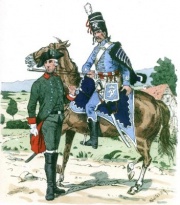 The unit was raised by an order dated September 14 1756. It recruited in Freiberg from unemployed Saxons. According to Bleckwenn's classification system, the unit is designated as “Frei-Infanterie Regiment F2”. The unit consisted of one battalion:

In 1759, Collignon raised a jäger detachment of 50 men and a hussar detachment of 34 men (1 lieutenant, 1 sergeant, 2 corporals, and 30 troopers). This hussar detachment was detached from the unit and assigned to the militia of the government of Magdeburg, becoming known as the “Kammer Hussars de Collignon”. The same year, the two 1-pdr guns of the battalion were replaced by 3-pdr guns.

During the winter of 1756-57, the unit was attacked in its winter-quarters but managed to repulse the enemy, Mayr was wounded during this action.

In May 1757, while the main army was invading Bohemia, Colonel Mayr, was ordered to seize any Austrian magazines there were, especially one big magazine at Pilsen. His force consisted of 200 hussars, 5 guns, his own unit and another one. On May 2, Mayr seized the magazine at Pilsen. He then went westward into Upper Palatinate where he scattered the drill-sergeants of the Reichsarmee, disturbed preparations and the deliberative county meetings and ransomed cities, Nuremberg for one city. On June 1 at Furth in Anspach, a gratuity for the Prussian troops was demanded and given. The troops then took quarters at Schwabach, farther up the Regnitz River where no exemption were made: clergy and laity alike getting soldiers billeted. Meat and drink had to be given them: as also 100 carolines (guineas and better), and twenty new uniforms. Next day, June 2, they marched to Zirndorf, and the Reichsgraf Puckler's Mansion, the Schloss of Farrenbach there. Mayr took quarter in the Schloss itself. Here the noble owners got up a ball for Mayr's entertainment; and did all they could contrive to induce a light treatment from him. Out of Farrenbach, the Mayr people circulated upon all the neighbouring Lordships; at Wilhelmsdorf, the Reichs-Furst von Hohenlohe had the worst brunt to bear. The adjacent Bayreuth lands were to the utmost spared all billeting, and even all transit. However, wandering sergeants of the Reichsarmee, one sergeant with the Würzburg Herr Commissarius and 8 common men, did get picked up on Bayreuth ground: and this or the other Anspach official (Anspach being disaffected), too busy on the wrong side, found himself suddenly prisoner of war; but was given up, at Wilhelmina's gracious request. On Bamberg, Mayr was sharp as flint; and had to be; the Bambergers, reinforced at last by Circle-Militias in quantity being called out in mass against him; and at Vach an actual passage of fight occurred. At the affair at Vach, Mayr engaged 6,000 militia of the Circle supported by 12 cannon, Mayr cunningly took a position unassailable, burnt bridges of the Regnitz River and, plying his 5 cannon against these ardent awkward people, stood cheerful on the other side; and then at last, in good time, whisked himself off to the hill of Kulmbach, with all his baggage, inexpugnable there for 3 days. Having girt himself and made his packages, Mayr left the hill of Kulmbach; and deliberately wended home, by Coburg and other countries where he had business, eating his way; and early in July was safe in the Erzgebirge (Metal Mountains) again. In July, the unit formed part of the rearguard of field-marshal Keith and occupied Erfurt and covered Leipzig. On August 30, Mayr Frei-Infanterie accompanied Frederick in the vanguard when the army left Dresden to march upon Erfurt. On September 14, when Frederick was forced to divide his army to contain the French in the region of Magdeburg and to secure the Prussian magazines in the area of Torgau, the unit remained with Frederick at Erfurt to observe the Franco-Imperial army. On November 5, though present at the battle of Rossbach, the battalion was not deployed and did not take part to the battle. After the battle, the battalion pursued the defeated Franco-Imperial army up to Erfurt. At the end of November, the unit destroyed the Austrian magazine and the bridge on the Elbe at Leitmeritz in Bohemia. It then took its winter-quarters in Chemnitz.

In mid February 1758, the battalion took part in an incursion in Franconia where it captured the town of Hof and took several prisoners. It also destroyed an arms factory at Suhl. On May 15, Prince Heinrich sent Mayr and his Frei-Infanterie careering once more about in Franconia. The battalion was then attached to the army of Prince Heinrich who tried to stop the Austrian invasion of Saxony. Mayr even reached Bayreuth where the camp of the Reichsarmee had lately been. At the end of July, the battalion successfully defended Marienberg. In August, the battalion observed the movements of the Austrian army between Meißen and Torgau. It was then placed in an advanced post at Mügeln. At the beginning of November, it was sent towards Dresden to hinder Daun's operations. On November, Mayr set the suburbs of Dresden afire to cover his retreat across the Elbe.

At the beginning of the campaign of 1759, the battalion was attached to the Prussian army operating in Saxony. In May, the battalion took part in an incursion in Bohemia against the Austrian magazines where it was attached to Prince Heinrich's vanguard. On May 8, it distinguished itself at the engagement of Asch. On August 12, during the Battle of Kunersdorf, the regiment formed part of Wunsch's Brigade guarding the bridge of Goritz. On October 8 in the morning, during Frederick's operations in Silesia, the unit occupied the town of Herrnstadt (present-day Wasosz). On October 22, the Russians twice summoned Colignon at Herrnstadt but the latter refused to surrender. On October 23, the Russian artillery bombarded Herrnstadt and completely burned it but the Prussian force still held its ground.

In the Spring of 1760, the battalion was attached to Fouqué's corps. On June 23, the unit took part in the Battle of Landeshut where it was almost completely destroyed. The remnants of the battalion were integrated into battalion Chaumontet.

By the Spring of 1761, the battalion had been re-established, receiving a second battalion and becoming a regiment. The regiment operated in Thuringia, observing the movements of the Reichsarmee. On October 30, at the engagement of Zarnglaff, the Russians captured the second battalion.

At the beginning of 1762, the Russians freed the second battalion, which soon joined its regiment, operating once more as part of the army of Prince Heinrich in Saxony. On October 29, the unit fought at the Battle of Freiberg.

Privates were armed with a short musket, a bayonet and a curved blade sabres.

NCOs were probably armed with a sabre and a half-pikes measuring 7 ½ Rhenish feet (2.37 m.).

Officers had tricorne wearing a scalloped silver lace' a black cockade fastened with a small silver button and a silver strap; and 2 black and white pompoms (1 in each side corne of the tricorne). They also wore a black and silver sash around the waist. Their coats were similar to those of the privates but had no turnbacks nor shoulder straps. Their waistcoat and its buttonholes were edged with a silver braid.

Privates were armed with a rifle and a curved blade sabres.

Officers had tricorne wearing a scalloped silver lace' a black cockade fastened with a small silver button and a silver strap; and 2 black and white pompoms (1 in each side corne of the tricorne). They also wore a black and silver sash around the waist. Their coats were similar to those of the privates but had no turnbacks nor shoulder straps. Their waistcoat and its buttonholes were edged with a silver braid.

Privates were armed with a rifle and a curved blade sabres.

None of the Freikorps units carried official colours or standards to the exception of von Kleist Frei Korps.

N.B.: the section Service during the War is mostly derived from our articles depicting the various campaigns, battles and sieges and incorporates texts from Carlyle.