In December 1760, as he was still under arrest in Württemberg, Joachim von Glasenapp, the commander of the Freihusaren von Glasenapp in the Württemberger service, offered his service to the King of Prussia.

On December 21, Glasenapp was promoted to major in the Prussian Army and authorised to raise a regiment of light dragoons at his own expense. The unit would consist of 5 sqns for a total of 21 officers, 50 NCOs, 15 trumpeters (an exception among dragoon regiments), 5 smiths and 500 dragoons. It had to be raised among foreigners in Nordhausen and Stolberg and then march to Leipzig. Glasenapp was appointed Chef of the “Frei-Dragoner von Glasenapp,” while the commander was Major Friedrich Wilhelm von Selchow.

In early January 1761, Major Johann Reinhold von Glasenapp, escaped to Saxony where he received command of his new unit of light dragoons.

In November 1762, Glasenapp was authorised to raise hussars for his Freikorps.

During the Seven Years' War, the Chef of the unit was:

During the Seven Years' War, the commander of the unit was:

After the Seven Years War, the corps was disbanded in March 1763 and its troops forcibly incorporated into Prussian cavalry regiments.

On March 9, 1761, the newly raised regiment marched from Stolberg to Nordhausen. Its troopers were still waiting to get horses. On March 12, a party of 150 French hussars and infantrymen attacked Nordhausen. They took Major von Selchow, his brother Captain von Selchow, Lieutenant von der Golz and a few dragoons prisoners. On March 16, the Selchow brothers, who had managed to escape from captivity, returned to Nordhausen. On March 27, the regiment set off from Nordhausen and marched in the direction of Frankenhausen. The regiment later marched to Leipzig, where it received horses.

For the campaign of 1761, the unit was attached to the Prussian army operating in Saxony under the command of Prince Heinrich. By May, the regiment was stationed in Schletta with 8 squadrons of the Frei-Dragoner Mayr (unidentified unit), under Major-General von Meyer. From May to July, the regiment continued to operate in the area of Leipzig and Merseburg, and recruited several French deserters.

On October 8, part of the unit joined Luckner’s Corps in the region of Halle. Meanwhile, the other part of the unit, under Colonel von Bohlen, was posted near Osterwieck to cover the region of Halberstadt. In mid-October, the unit was re-united in the region of Mansfeld. By October 23, it was in the vicinity of Querfurt. Colonel Bohnen entered Leimbach at the head of 200 dragoons of the unit, 1 infantry regiment of the garrison of Magdeburg, 50 free hussars and 2 guns. In the evening a detachment was sent to Schraplau and Seeburg, forcing the Otto Free-Jäger Corps to retire. On October 27, when the Austrians counter-attacked, the Otto Free-Jäger Corps engaged the unit near Helfta pursuing it up to Hettstedt. On November 13 at 4:00 a.m., 24 dragoons of the unit engaged an Austrian patrol near Hettstedt.

The unit probably took up its winter-quarters in the region of Leipzig.

On January 21, 1762, the regiment set off from Zeitz and marched in the direction of Schulpforte and probably took part in an engagement near Bad Kösen.

For the campaign of 1762, the unit was once more attached to the Prussian Army of Saxony under Prince Heinrich.

On May 1, Major von Glasenapp set off from Leipzig with 200 men (dragoons of his own unit and hussars of the [[Freikorps von Kleist|Kleist Frei-Hussaren) to attack one of Luzinsky’s outpost near Rötha. However, their attack was driven back. On May 6, the unit retired to Leipzig. On May 7, it took part in skirmishes near Lindenau and Brandvorwerk. A squadron of the unit then joined the army of Prince Heinrich. On May 12, it was probably present at the Combat of Doebeln, where it would have covered the flank of the army. After this victorious engagement, the rest of the unit was stationed near Leipzig to cover the region. On May 21, a detachment took part in an engagement near Öderan.

On August 21, the unit set off from Leipzig to join the army. It was brigaded, under Lieutenant-Colonel Chambaud, with the Belling Hussars and stationed in Thuringia.

On September 8, Major von Glasenapp was detached from Erfurt with 400 men (300 of his own dragoons and 100 Belling Hussars) to Johannistor. He forced the inhabitants to open the gate, entered the town and raised contributions. He then retired to Langensalza. During Glasenapp’s sojourn at Langensalza, another detachment of the unit was sent towards Alperstadt. Glasenapp then marched from Langensalza with 100 men and reached Gotha on September 18. On September 19, Glasenapp engaged the Saxon Frei-Husaren von Schill near Manebach, capturing 30 prisoners.

On October 8, Glasenapp established his headquarters at Weissensee. On October 13, the squadron still posted in Saxony was near the Mulde River, some 20 km west of Dresden. It formed part of a light corps which covered the flank of the main army encamped near Freiberg. This corps drove back Austrian light troops near Blankenstein. On October 14, it took part in another engagement near Biberstein.

In November, Glasenapp was authorised to raise hussars for his Freikorps.

On November 4, four dragoon squadrons of the unit were driven out of Weissensee and fled to Sachsenburg by way of Günstedt, abandoning their baggage.

By the end of December, Glasenapp’s unit consisted of 5 dragoon squadrons (591 men) and 2 hussar squadrons (109 men). A large part of the unit was posted near Eisenach. 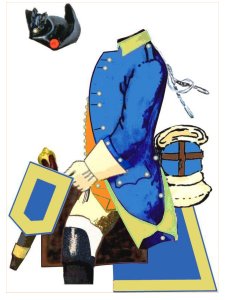 Troopers were probably armed with a sword, a pair of pistols, a musket and a bayonet.

NCOs wore the same uniform as the troopers with the following distinctions:

Exceptionally, the unit had 15 trumpeters instead of drummers as it was usually the case for dragoon regiments. 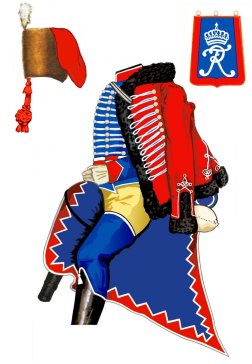 Troopers were armed with a sabre, two pistols and a carbine.

Marcel Dings and Frank Poeth for their kind authorization to improve this article based on their book.